PalaPanini bows to Trentino Volley: the 3-0 victory in game 4 is the fourth yellow-blues championship 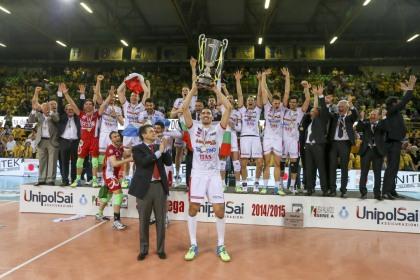 Emanuele Birarelli with the Scudetto 2015 Cup at PalaPanini after game

CHAMPIONS OF ITALY, CHAMPIONS OF ITALY, CHAMPIONS OF ITALY, CHAMPIONS OF ITALY !!! The Championship is again on the road with Trento after only one season of distance. Two years after the victory of the last previous Italian title, the Clubs of via Trener sew again, on their chest, and brings back the tricolor of Trento along with it also the Mondoflex depicting the national flag (which from October will be laid again in PalaTrento for the matches of Super League as a symbol of Italian leadership). All this thanks to a peremptory 3-0 imposed in a legendary game 4 at PalaPanini who finished the series with the match ahead.
Stoytchev team has chosen the most prestigious stage of the Italian volleyball, where in the recent past has been written the history of Italian volleyball, penned by one of the most glorious and memorable page of its activities and of the entire Trentino’ sport. The fourth title of Trentino Volley, that in this way reaches the legendary Cus Torino in number of tricolor victories, will probably be remembered as the most unexpected and therefore also for the most beautiful triumphs of the Company chaired by Diego Mosna. Only a team like Diatec Trentino seen during this entire season, never tamed and incredibly united, could in fact succeed in violating the temple of volleyball crammed into every type of place (5,000 spectators). However, to celebrate the final, were only 350 Trentino’s fans, arrived from Trento with 7 coaches, who saw Birarelli and teammates repeat, and indeed improve, their splendid performance shown on Sunday in game 3. The seal of the year that has seen them reaching the bottom of each event in which they took part in, was obtained through a very continuous game, with no particular errors that gradually exalted all the protagonists: Kaziyski and Djuric for continuity shown at the net (13 points each), Colaci for an outstanding contribution in the second line, Lanza for the coolness in the important moments and then Simone Giannelli. The young setter form Bolzano has put the icing on the cake of his unimaginable final series managing the team as a true champion, blocking, attacking like a veteran. The MVP award could only be his, a phenomenal eighteen year old, who has been already eight times champion of Italy with the shirt of Trentino Volley among youth (6) and the first team (2).