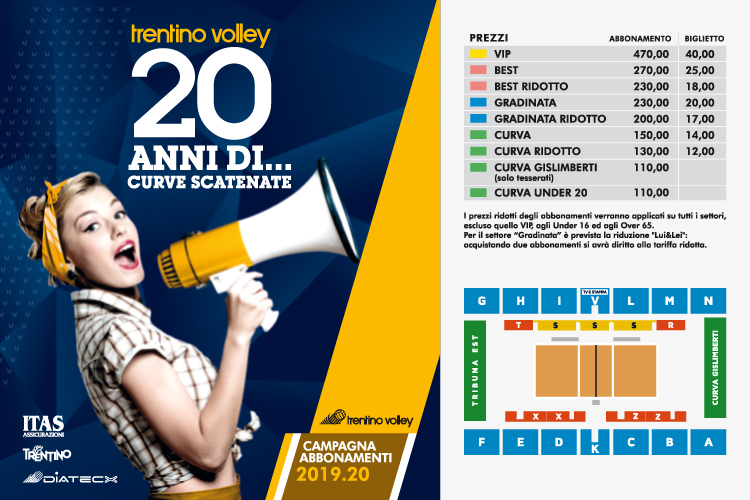 The launch of the seasonal ticket campaign represent the traditional opening moment of the new season. What will start in October will be a special year for Trentino Volley, which will cut the milestone of twenty years of activity.
With the slogan "20 years ..." the Trentino management wants to rally a growing number of enthusiasts, focusing on the twenty-year tradition that, every Sunday, brings thousands of fans to the arena. The Trentino Volley 2019/20 Seasonal Ticket Campaign will start on Tuesday 9th July. All the details of the initiative were presented this afternoon at the prestigious Sala Depero of the Grand Hotel Trento (for years partner for conferences and press presentations) in a crowded meeting attended by authorities, managers, sponsors, fans, media.
To promote claim and  images of the 2019/20 Subscription Campaign, Trentino Volley will use the usual channels (press releases, newsletters and social networks) but will implement a real advertising campaign, which will cover the province of Trento of advertising posters and that had been so successful in previous summers.
Below all the details of the Trentino Volley 2019/20 Seasonal Ticket Campaign:
TICKETS AND PRICES. The 2019/2020 seasonal card includes all SuperLega Credem Banca home games in the regular season, the three of the first phase of the 2020 CEV Champions League and another match yet to be defined, among other European commitments, of the Coppa Italia or the Play Off Scudetto. Prices will range between 470 euros for the VIP and 110 euros for the Curva for the Under 20s.
SECTORS. The BLM Group Arena will be divided into four sectors: VIP, Best and Stand will be numbered; the first two can count on comfortable chairs with backs, while the supporters area will be the only not numbered. It will not be possible to purchase a season ticket for the East bleachers, a sector that could be reserved for guest supporters during the season.
ONLINE SELLING. It will also be possible to subscribe online, thanks to the online service offered by the Vivaticket partner; at the direct link www.trentinovolley.it/abbonationline you can find all the instructions to proceed with the purchase; by printing the receipt directly with your printer, you can then present yourself at the Trentino Volley Point to collect the card.
PRE-EMPTION. Subscribers to the 2018/19 season can exercise their pre-emption until the 2nd of August, confirming their place and paying their subscription by that date. Preemption may also be exercised via the internet, again by clicking www.trentinovolley.it/abbonamentionline.
REDUCTION. The reduced prices will be applied to the under 16, over 65 on all sectors (VIP excluded). The "Him&Her" promotion has been confirmed (two reduced passes for the stand only).
SPECIAL DISCOUNTS FOR UNDER 20. As part of the reductions, to be reported also the advantageous price reserved for the Under 20, who can subscribe to the supporters area season ticket for just 110 euros.