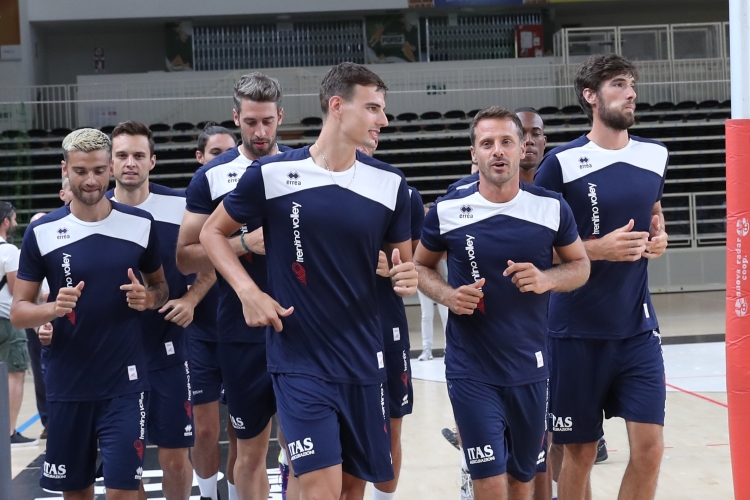 Today’s afternoon the season 2019/20 of the new Itas Trentino has kicked off. The World Champions have gathered at BLM Group Arena in Trento in order to start the training ahead of the first official appointment (20th of October, away match in Ravenna for the first day of SuperLega). The presence – already on the first day - of the half of the roster’s players (six out of the 13 members) has already aroused big curiosity in the many fans and journalists who followed the first training.
Among the present players, there was surprisingly also Simone Giannelli; waiting to move forward (on the 25th August in Cavalese) with the training with the Italian National team ahead of the European competition, the Captain wanted however to be present greeting his fellows, staff and fans. In this first part of work, the group of Angelo Lorenzetti has at its disposal Nicola Daldello as setter, Luca Vettori as opposite, Davide Candellaro (after the italian convocation he will leave for Cavalese on Thursday) and Lorenzo Codarin as centrals, Carlo De Angelis as libero and the cuban Luis Sosa Sierra as spiker (only new member of the team). Also Simone Parodi, the ex spiker from Cuneo, Civitanova and Latina and other six of the best Young players are going to train with them during the first weeks; these will then compete for the Serie A3 championship: the spiker Bonatesta, the centrals Acuti and Simone, the setter Pizzini, the opposite Poggio and the libero Zanlucchi.
Also the technical and medical staff of the last season has been confirmed and is ready to work for the whole season with the coach. Also the Team Manager Riccardo Michieletto will lead Itas experiences (this is his 15th season between volleyball court and office for Trentino Volley), the Assistant Coaches Francesco Petrella and Dante Boninfante, the trainer Alessandro Guazzaloca (who has led today’s first weight-lifting training), the physiotherapist Alessandro Russo, the scoutman Mattia Castello and the social physician Mauro Bertoluzza. The programme of the first week of preparation is well structured, with two sessions of training on Wednesday and Friday (swimming in the morning, technique in the afternoon), but also on Thursday (weight-lifting and technique), whereas on Saturday (the last day before a Sunday of rest) there will be only a training with ball in the morning.