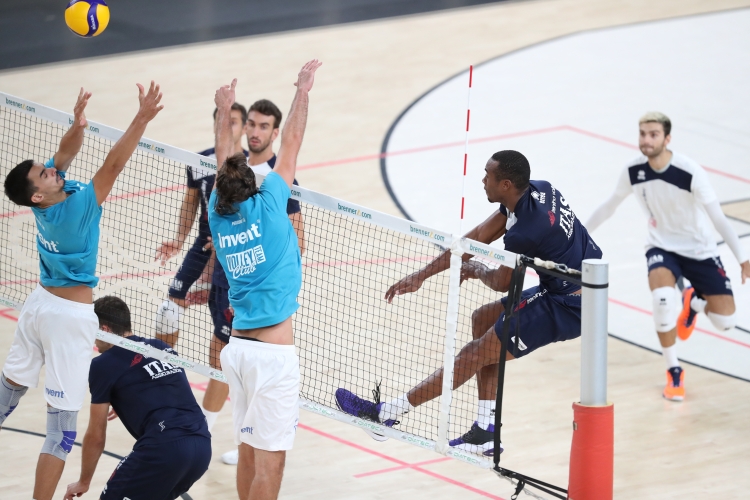 Some good volleyball moments, within limits, and the feeling of a growing physical and technical condition. The midweek joint training session along with the Serie A3 team Invent San Donà, undergone this afternoon in the BLM Group Arena, gave hopeful signs to Itas Trentino. After the two-hour last Friday’s session together with Calzedonia Verona, this second scrimmage session has just proved that during this first month of training Angelo Lorenzetti and his staff are hitting on the right and effective road. This confirmation came from the attitude shown by the team for most of today's two-hour session and particularly in the basics of block (scored 15 times) and service (successful 7 times), which already looked highly powerful. With only Mitar Djuric working separately, the five available players of the new squad have already shown some good ideas, notably the effectiveness of the Cuban Luis Sosa Sierra (25 winning balls, 58% in attack, three blocks and one ace), as well as the permanent presence to the net from Vettori (31 points, three blocks and two winning services over 52%) and the convincing performance from Codarin at the center (15 points, five blocks). As it had already happened throughout last Friday’s training session in the AGSM Forum in Verona, during today's joint training the two coaches have alternated real sets (2-1 for Trento, with scores of 23-25, 25-15, 15-10) to tactical exercises on the break point phase. Itas Trentino will be back to the BLM Group Arena on Thursday to undergo a lunch practice session with the ball and in the evening to train in the weight room. The fourth week will end with trainings on Friday afternoon on the central court and on Saturday morning again in the weight room.