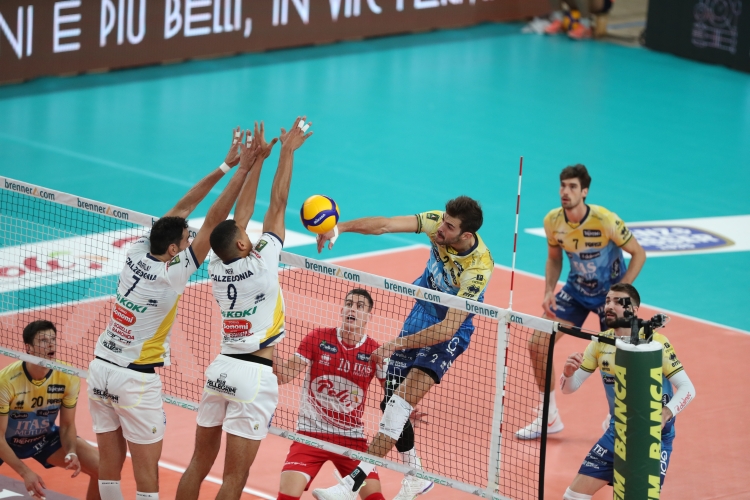 The report of the thirty-eighth derby of the Adige. Angelo Lorenzetti proposes again the roster already seen in most of the matches of the previous season: Giannelli as setter directing, Vettori as opposed, Russell and Kovacevic as spikers, Lisinac and Candellaro as middle-blockers, Grebennikov as libero. Radostin Stoytchev, at the second match ever as former at the BLM Group Arena, lined up the Calzedonia Verona with Spirito as setter, Boyer as opposite, Muagututia and Asparuhov as spikers, Birarelli and Solé as middle-blockers, Bonami as libero. Itas Trentino take the advantage from the beginnings, thanks to the excellent actions of Russell in attack and Kovacevic at the net area; in just a few seconds the team goes from 3-2 to 7-3, a gap that the hosts confirm even after the side-out phase (9-5). The time-out of Verona does not improve the situation, because the team’s actions are foul but Trento makes some mistakes with Kovacevic (14-10). A Boyer's ace on Russell and a block of Maugututia on Vettori make the gap smaller (17-15 and then 20-19) and force the Itas Trentino to interrupt the game. An attack out of the French opposite allows the Itas Trentino to better manage the final phase (23-20, 24-22) and to close in counterattack with Russell.
After changing field, the Calzedonia Verona comes back with a different attitude, better incisiveness in attack and a sharper serve that allow it to reach the 5-7, forcing Lorenzetti to immediately call a time-out. The two aces of Vettori carry the yellow-blue straight back on track (10-9), then Russell's turn to serve and the opposition of Verona take the World Champions to the +4 (15-11). Birarelli (ace and subsequent defense capitalized by Boyer) offer a new equality (16-16), making the set ending even more exciting. After the Lisinac block on Muagututia (23-21) and the Kovacevic block on Boyer (25-22) Trento won the match.
Calzedonia tries again in the third set (2-5, 4-8), helped in its intent by Solé (wall and attack). Lorenzetti immediately call a time out, but to get the desired reaction he must wait for 10-11 with Lisinac as protagonist. Boyer in attack signs the new extension (12-15), then Verona spreads with the ace of Maugututia and the block of Solé on Vettori (13-18). An ace of Vettori with the collaboration with the other two attackers delivers the -2 (17-19), a situation that forces Stoytchev to interrupt the game. At the restart Asparuhov enlarges the gap (18-22) and  delivers the set to Verona (21-25).
On the wave of enthusiasm Verona immediately takes advantage of the difficulties of the hosts; on 5-10 Lorenzetti has already run out of time outs (the first on 5-8), without finding the desired reaction. Kovacevic at the net area tries to close the gap (11-15), but Verona continues making points (14-21). Lisinac realizes two consecutive ace (18-22), but the attempt is late in order not to bring the game to the tie break (19-25).
The fifth set gives balance and uncertainty to the end, with the two teams alternating with the command (1-2, 4-3, 6-7, 8-7, 11-11, 13-12) in a crescendo of emotions and high-level exchanges. The decisive action offers Russell's block to Boyer (16-14) an advantage.