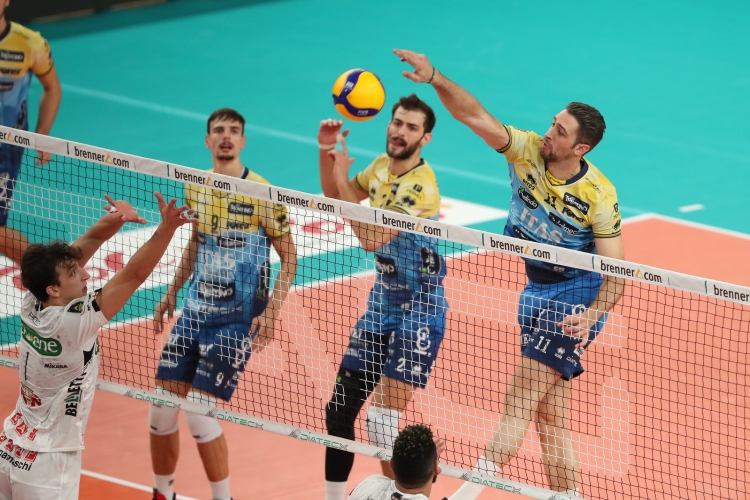 The chronicle of the match. The formation chosen by coach Angelo Lorenzetti for this occasion includes Giannelli setter, Vettori opposite spiker, Kovacevic and Russell hitter spikers, Lisinac and Candellaro middle-blockers, Grebennikov libero. While Kioene Padova: Travica setter, Hernandez opposite spiker, Barnes and Ishikawa place 4, Volpato and Polo middle-blockers, Danani libero. The start is in the sign of the ball changer, fifteen in a row before the first break signed by a block of Lisinac on the pipe of Barnes (9-7). In the central part of the opening set the hosts try to increase their advantage (12-9) thanks to an error of Hernandez but the hosts with the same Barnes make up again immediately below (12-11). The contest then returns to be balanced (14-14, 18-18); to break it definitively you need an ace of Giannelli and a block of Kovacevic on the opposite spiker Cuban (21-18). Trento manages the advantage, then Djuric increases it (24-19) and concludes the game on 25-20 with a mistake in the service Patavino.
In the second part of the game, Itas Trentino returned to the field unloaded and immediately suffered the actions of Kioene, that in a few minutes moved forward 1-5, forcing Lorenzetti to stop the game. However, the course of the match didn't change, because the gialloblù team made a mistake in the attack (3-9). Kovacevic tries to shake his own to the sound of attacks (10-14); the Itas Trentino launch in pursuit of the opponent (14-18, 17-19) dragged by Vectors (ace and counterattack). On the most beautiful, however, Polo blocks the same opposite (19-23) and Padua makes his action on 1-1 (20-25).
In the third set Padua is again in the lead in the break point phase (3-4 and 5-8), taking advantage of some mistakes of the gialloblù team. Lorenzetti has already spent both time outs on the 6-10, without being able to find a good solution, so  that Lisinac's mistake in the first half is worth the +5 guest (7-12). The Trentino coach then puts Cebulj into the field for a Kovacevic who seems to be in difficulty  (11-17), but the game does not change and Kioene continues to be effective at his actions: first (13-20) and then (16-23). The external advantage in the calculation of the partials arrives therefore already on 19-25, thanks to  Hernandez.
The fourth set begins with a lot of services of Ishikawa; the two successful permit the advantage of Kioene (3-6). Trentino Volley gradually loses the connection (7-11, 8-13) and so Lorenzetti proposes the double change Djuric-Codarin for Vettori-Lisinac. The shock that the World Champions were looking for is taken by Mitar, who with a counterforce and a block shakes the team (12-14), that within minutes finds the tie (15-15).  The last part of the set is almost lived on the point to point (20-20, 22-22), in which stand out three imperious blocks of Codarin. To decide the set it is a double attack of Cebulj (24-22 and 25-23). In the tie break Trentino Volley immeidtaley found the opportunity for the lead (5-3, 8-5); Padova replies with Ishikawa (10-10) and reaches +2 with Hernandez (11-13). Trentino Volley ralizes a sensational partial of 3-0 (14-13) with Cebulj; then Kioene cancels a match ball, does not use four and closes a the fifth (19-21) with a mistake oF Cebulj.