BLM Group Arena, all the info in view of the match against Perugia scheduled for Sunday 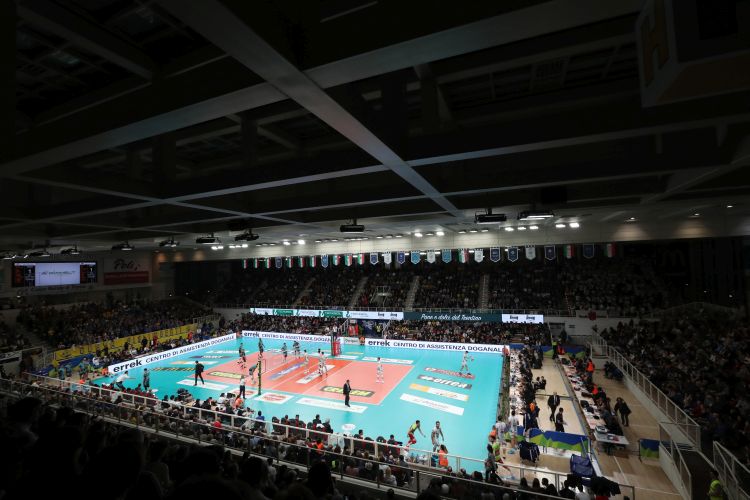 BLM Group Arena of Trento is preparing to host the first big match of the twentieth season of activity of Trentino Volley. The Itas Trentino-Sir Safety Conad Perugia match will be played on Sunday, December 1st at 4.45 pm at BLM Group Arena. It will be a remake of the recent Del Monte® Supercoppa 2019 semi-final and advanced match of the thirteenth regular session of SuperLega Credem Banca 2019/20. Below the main information useful to follow the event.

WHY TRENTINO ITAS PLAYS ON 1ST DECEMBER AT 4.45?
The match, originally scheduled for Sunday December 22nd, will be played in advance of three rounds in order to allow Lube Cucine Civitanova to play the 2019 Club World Cup in Brazil. For this reason, the match with Lube Cucine (originally scheduled for December 1) will be played on Sunday 22nd at BLM Group Arena. The beginning of the match is scheduled at 4.45 p.m, an unusual time, in order to allow the live TV on RAI Sport+. In addition, the live broadcast on Radio Dolomiti is also planned.

PRE-SALE TICKETS AND TIME
Some tickets are still available on the corner stand (Area A and G, 20 euros full price ticket, 17 euros reduced-price ticket) and on the east bleachers (20 euros full price ticket, 18 euros reduced-price ticket). The tickets can be purchased through the usual distribution channels: Trentino Volley offices Via Trener 2 in Trento (open until 6.00 pm), PromoEvent Via Suffragio 10 in Trento (also open on Saturdays until 6.00 pm), in all authorized dealers Vivaticket and on internet, by clicking on www.vivaticket.it/ita/event/itas-trentino-perugia/142938. The unsold tickets will then be available on Sunday at the ticket offices of BLM Group Arena, open starting from 3.30 pm. At the same time, the entrances to the arena will also be opened.