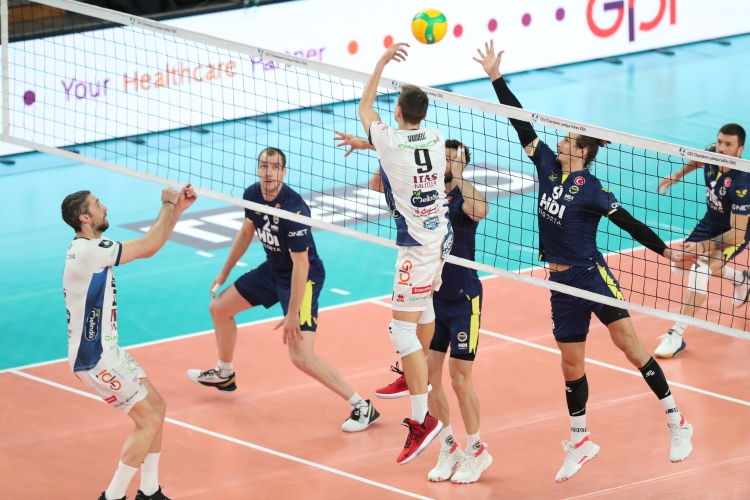 Match report. For the first international match of the season, without any limitation connected to the number of foreign players in the court, Lorenzetti makes room right away for Djuric as the opposite hitter, in diagonal with the setter Giannelli. The other five of the starting six are Kovacevic and Russell as outside hitters, Lisinac and Candellaro the middle hitters and Grebennikov as the libero. Fenerbahce HDI Sigorta Istanbul reached the BLM Group Arana with Kiyak as the setter, Ter Maat as the opposite hitter, Hidalgo Oliva and Rossard in area 4, Batur and Sikar as the middle hitters and Karats, the libero. The beginning of the match is very balanced, also the spikers of the opposite team seam to be in good shape (5-5); it is Rossards’ initiative that changes the situation (block on Djuric and counterattack) and the scoring (5-8), the gap is increased by a block of Batur on Kovacevic and by the ace of the French player in area 4 (6-11). Giannelli and Djuric sound the charge (10-13), trying to motivate the team that do not manage to reduce the distance in the central part of the set (14-17). Russell’s faul on the second line increases the distance (14-19), forcing Trentino Itas to ask also for the second time out. As the team takes the field again, nothing is changed (17-22) and the Fenerbahce wins the first set 21-25.
The homeowners try to change the trend at the beginning of the second set, using Russell in the attacking phase, who, is able to make a disadvantage (3-5) into an advantage (9-8) for the first time since the beginning of the match and almost alone. The Turks do not give up (11-11) so the team tries to respond with a counterattack of Russell and a block of Lisinac on Rossard (17-15). Ter Mat fills the gap (19-19), leading to 20-20 before the guests take the lead (22-23) after Russell’s first mistake. At the first opportunity Fenerbahce achieves also the second set with Hidalgo Olivia (23-25).
In the third set Lorenzetti makes Vettori take the field instead of Djuric and after a bit replaces Kovacevic with Cebulj. There are no immediate consequences, because the Turks increase the pace right away with Hidalgo Oliva and Ter Maat (2-5 and 3-8). It is Russell again to change the situation with two aces (10-11). They reach the thirteenth point thanks to Hidalgo Olivia’s mistake, and then it is still Aaron who supasses them (15-14), forcing the opponents to ask for a time out. As they take the field again the opponents are nervous, they make mistakes which allow Trentino Itas to take the lead (17-20) and to easily win the set afterwords 25-18, with Lisinac effective by serving and Vettori’s playing.
It is Fenerbahce to have the advantage as the fourth set starts (2-5), but Trento responds with block and counterattack (8-5), always led by an unstoppable Russell. In the central part of the set Trentino Itas tries to increase the advantage (12-7) and they manage, making good use of the excellent block and of Giannelli’s ability to organise the attack (16-11). The team keeps the advantage well (21-17) and reaches the tie break with three consecutive aces of Vettori (25-17).
The fifth match is filled by strong emotions and reversed situations (4-2, 6-8, 11-11); Lisinac’s ace snatch the victory from the opponents (16-14).