SuperLega, on the field for the 12th round of regular season 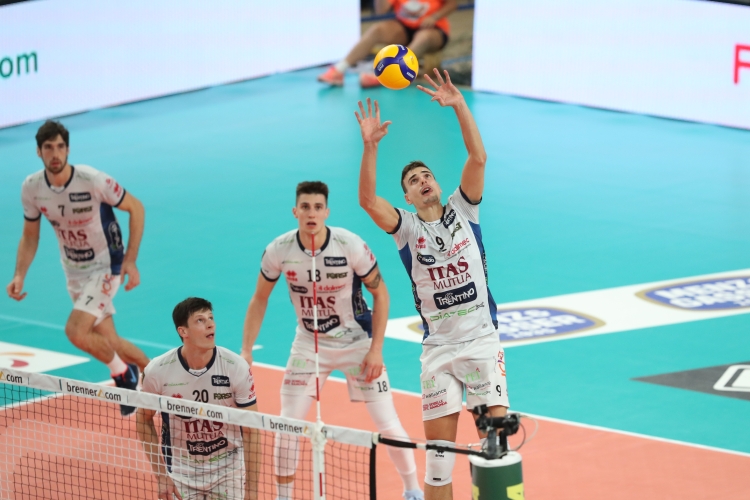 SuperLega Credem Banca 2029/20 will be on the field in the weekend for the 12th round of regular season, the penultimate in the going round. On Sunday 15 December, Itas Trentino will be guest of Globo Banca Popolare del Frusinate Sora, a team that plays its home match at PalaCoccia in Veroli (Frosinone). The beginning of the match is scheduled at 6.00 p.m: report of the match on Radio Dolomiti and live streaming on Lega Volley Channel at the link www.elevensports.it.
HERE ITAS TRENTINO. After a break and after playing five sets of CEV Champions League on Thursday evening, the yellow-blue team is back on the field in Lazio in order to try to rise through the ranks. “Beyond the ranking, it is important to take every opportunity we have in order to improve our performance – states the yellow-blue trainer Angelo Lorenzetti -. We do not need any pressure; we will go in Veroli to show our volleyball and to test what we are doing at the gym every day. We will find Sora, a team that is proving to be better and better. A team that makes few mistakes and with a relaxed attitude. The spiker Joao Rafael is certainly the reference point in attack and it is no easy to stop him”.
Itas Trentino will be at its 13th seasonal match with no formation problems; the whole roster will be in Lazio today. On this occasion, Itas Trentino will play its 828th official match of its history and goes in search of its 578th victory. Currently has 302 home victories and 275 away victories.
THE OPPONENTS. Since Globo Banca Popolare Del Frusinate Sora has already played the match of the 13th round in Civitanova at the end of October, the team will end the going round of its regular season with the match scheduled for Sunday. For the team from Lazio the match against Itas Trentino will be its last occasion to change the ranking, which has only four points obtained thanks to the victory against Vibo and to the point obtained at PalaCoccia against Piacenza two weeks ago.
Despite the last place in the ranking, the team of Maurizio Colucci has often shown that it can put his opponents in trouble. The most efficient player so far has been the Brazilian Joao Rafael, spiker who scored 157 points (47% at the net zone), then the middle-blocker Caneschi  (already scored 25 points) is proving to have a greater authority after the debut season. The news are the Brazilian setter Radke and the Belarusian opposite Miskevich (returned to Lazio after the exciting season in Sora in 2016/17).
PREVIOUS MATCHES Trentino Volley and Argos Volley Sora have six official matches behind them played in the SuperLega 2016/17, 2017/18 and 2018/19 regular seasons. The balance is only in favour of the yellow-blue company, which lost only three sets: the one in Trento (December 16th 2016), the one played Frosinone (December 17th 2017) and the one  in Veroli (October 21st 2018). The most recent match is referred to the December 30th 2018: 3-0 at BLM Group Arena with mvp Vectors (17 points, 72% in attack, 2 blocks and as many aces).
REFEREES The match will be directed by Rocco Brancati (first referee of Città di Castello - Perugia, in Serie A from 2015) and Ubaldo Luciani (second referee of Chiaravalle - Ancona, in league from 2009). The only one that has precedents with Trentino Volley is Brancati (at the second seasonal game in SuperLega) who directed Trento-Castellana Grotte 3-0 on February 3rd.
RADIO, INTERNET AND TV The match will be live on Radio Dolomiti, media partner of Trentino Volley. The connections with Lazio will be made within the "Dolomiti Sport Show", a space reserved to sport of the transmitter of via Missioni Africane. On www.radiodolomiti.com it will also be possible to listen to the live report.
Click on www.elevensports.it for the streaming video (service on payment) on “Lega Volley Channel”. On TV the full match will be broadcast on Monday February 16th at 10.00 p.m. on RTTR, TV partner of Trentino Volley. Finally, on Internet, all the updates on the Lega Volleyball Serie A website (www.legavolley.it) and on www.trentinovolley.it. They will always be active on the social networks (www.trentinovolley.it/facebook and www.trentinovolley.it/twitter).