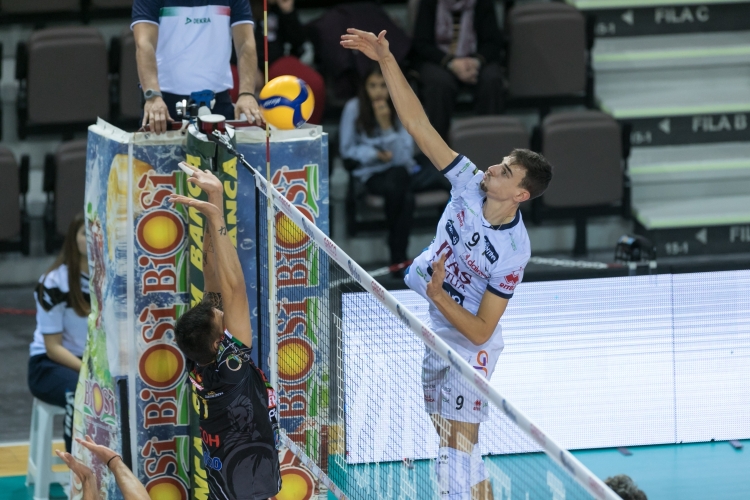 Match report. At the PalaCoccia Angelo Lorenzetti changes the game again, proposing in the starting six Vettori and Cebulj; the other five first-string players are Giannelli as setter, Russell in position 4, Candellaro and Lisinac as middle blockers, Grebennikov as libero. Globo Banca Popolare del Frusinate Sora responds with Radke as setter, Miskevich as opposite, Joao Rafael and Van Tilburg as spikers, Caneschi and Di Martino as middle blockers, Sorgente as libero. The start of the match is balanced (4-4, 6-6), then Vettori provides the first double advantage (8-6); the hosts don’t get scared and score 4 points with a positive performance by Joao Rafael at the serve, forcing Itas Trentino to call a time out at 9-11. At the resumption of the game Giannelli and Vettori turn the tables in attack (14-12), but the key elements are the great services of Cebulj who also performs regularly in pipe, providing a greater advantage (19-15); Itas Trentino manages well the great margin and ends the set with 25-20.
Globo Banca Popolare del Frusinate tries to perform a come back in the second set, starting well with a very aggressive serving and a block (3-5, 5-9). Trento suffers, Lorenzetti calls a time out but has to wait until 12-15 to get the result he wants; Vettori, Cebulj and Russell lead their teammates to a tie at 16 and then to the overtaking (20-17). The second set is absolutely under control as well and Giannelli exploits Russell to get to 2-0 as fast as possible, at 25-21. Itas Trentino starts again with the handbrake pulled also in the third set, but the advantage of the opponents (2-5) is fast reduced and they easily reach 6-6 thanks to Russell. Trento increases the pace by serving and blocking, being effective with Vettori and Giannelli during the break point phase (10-7, 14-10). Lisinac’s serving and his ace lead to +6 (19-13), closing the match in advance 25-16.