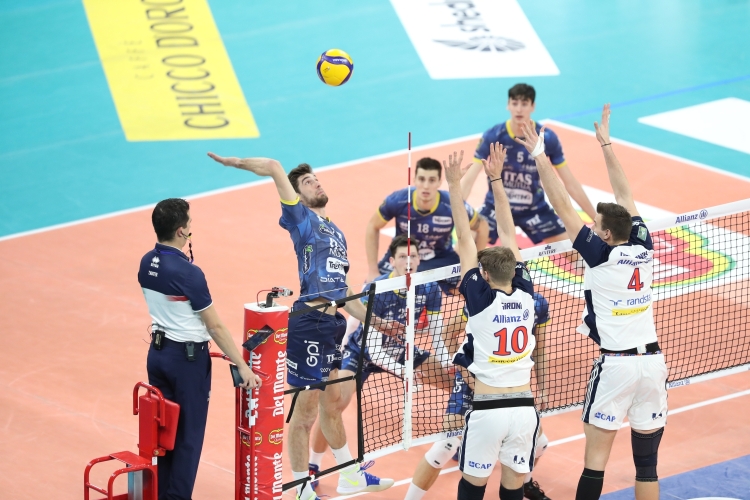 Match report. Angelo Lorenzetti cannot count on Russell (pain in the right shoulder, that started a couple of hours before the match) so forms the starting six with Giannelli as the setter, Vettori the opposite hitter, Cebulj and Kovacevic (also in pain) as the outside hitters, Lisinac and Candellaro as the middle hitters and Grebennikov the libero. Milan’s starting six is composed by Sbertoli the setter, Abdel-Aziz the opposite hitter, Gironi and Petric in area 4, Clevenot and Kozamernik in the middle and Pesaresi the libero. Itas Trentino’s beginning is bursting, especially in the blocking and break phase. Reaching fast 4-1 thanks to Cebulj and Lisinac’s blocks on Abdel-Aziz and Petric together with Candellaro’s ace. Milano tries to react with Kozamernik (5-4), but Trento increases the pace with Cebulj (11-8); it is Abdel-Aziz to turn the tables with three aces in a row (11-12). Both teams are even (15-15, 19-19), switching the lead one point after another, before Giannelli’s block on Abdel-Aziz created an advantage (21-19). Itas Trentino holds on in the advantage with Sosa Sierra, making the best out of Kozamernik’s mistakes by serving and Abdel-Aziz’s by attacking and wins the first set (25-23).

Trento begins the second set with the same mentality: by blocking, serving and with Cebulj’s attacks, the team gains fast the advantage (4-1, 8-4) just to lose it later thanks to Gironi’s serving (8-8). Itas Trentino does not fear: Vettori and Lisinac increase the pace (13-10, 16-13) and keep the advantage even when Milano tries to respond with Clevenot (16-15 and then 18-16). In this case Vettori saves the day, first by serving and then in attack, bringing the team to +6 (21-15), a score defended by his teammates until they get to 2-0, already at 25-19.
In the third set Lorenzetti decides to promote Michieletto to first-string player, and he pays back by receiving and in attack; Itas Trentino still plays well with blocks and by serving and reaches 7-5 and then 9-6. Grebennikov exalts himself in defence and allows his teammates to score many points (12-8, 14-8). Itas doesn’t stop, it responds well even with Abdel-Aziz serving (19-15) and quickly gets towards 3-0 (22-18), which gives the team a pass for Bologna (25-19).