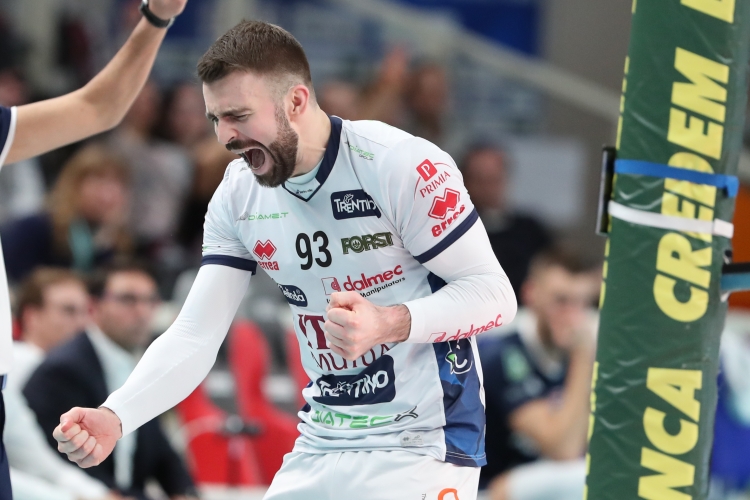 The twentieth season of activity of the Trentino Volley will inevitably be remembered for the forced stop of this days, caused by the word health emergency related to Coronavirus, but fortunately not only for this reason. Waiting for positive signs to be able to play again, here is a series of curious statistical pills, emerged during the first thirty official matches played.

66% Is the percentage of matches won so far during the season 2019/20 by Trentino Volley: 20 out of 30 played overall. The detail talks about 15 successes in regular season SuperLeague, 4 in Champions League, 1 in Italian Cup. Curiously, the team has won more in the away games (9 at home, 11 in away games); the result that has been repeated several times was 3-1 (in 9 occasions: 4 times at the BLM Group Arena and 5 in away games). Half of the defeats bear the signature of Civitanova that has won against Trentino Volley five times (two in regular season, two in Champions League and one in the Italian Cup).

HEAD-TO-HEAD: CIVITANOVA REACHES MODENA Until this season, Modena has always been, by far, the opponent faced several times in official matches during the history of Trentino Volley. But the fifth matches played between December and March allowed the Cucine Lube Civitanova to reach the Leo Shoes Modena that now has only one race of advantage (74) on file compared to those of Cucine Lube Civitanova (73). The substantial approach is mainly explained by the big difference of matches played in the last two seasons; Modena played against Trento only five times in the last eighteen months, while at Civitanova happened thirteen times.

CAPTAIN'S BAND: GIANNELLI AT THREE PRESENCES FROM BIRARELLI The stop to official matches interrupted the forcing that Simone Giannelli was practicing against Emanuele Birarelli to gain the third place on the field with the captain's jersey of Trentino Volley. In May 2016 the middle blocker from Marche region stopped at 91 points before passing to Perugia, the setter from Bolzano (who inherited this role from Filippo Lanza, second at 150 points) with the one collected on March 8th at Civitanova counts 88 points, three more than Grbic (85), overtaken by Simone during the semi-final of the Coppa Italia on February 22nd lost in Bologna against Cucine Lube. The top scorer of this special classification is Matey Kaziyski, captain of Trento for 204 consecutive games. In the current line-up there is another player who has played this role, although only on one occasion: the opposite Mitar Djuric, captain in a match of the 2015/16 season.

KOVACEVIC AND VETTORI ON THE TOP The first half of the season has allowed Uros Kovacevic and Luca Vettori to gain several positions in the scorers' ranking in the history of Trentino Volley. Thanks to the 260 points scored in the 24 matches played in this competitive year, the Serbian left-handed player has in fact reached 1,519, becoming the seventh bomber overall (at the beginning of the season he was tenth), while with the 419 winning balls put so far on the ground, the Emilian opponent has risen to eighth place at 1,463 (in October he was fifteenth). Although playing less, Djuric also took away the satisfaction of gaining a position, overtaking Sokolov (stopped at 1425) thanks to the 1,429 points achieved since he wore the Gialloblù jersey.