Amarcord, five years ago at the PalaPanini the fourth championship of our history 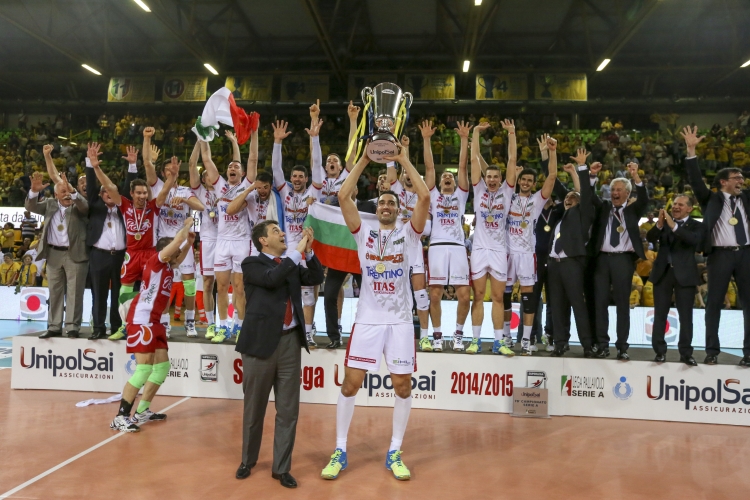 13 May 2015 - 13 May 2020: today Trentino Volley calendar recalls the unforgettable evening at PalaPanini in Modena. By conquering the Emilia arena in just three sets, just five years ago, on this date Trentino Volley secured the fourth championship in its history. Of all those won, the 2015 championship was certainly the least predicted at the start of that season. The then ENERGY T.I. Diatec Trentino was not among the favourites at the beginning of the championship, but it quickly found the right alchemy and even closed the series of the Play Off Championship Final on 3-1 thanks to the 3-0 away win obtained on the evening of May 13th against Parmareggio Modena. Modena had already defeated Trentino Volley in the 2015 Coppa Italia Final; the team coached by Stoytchev took advantage of the 1-3 defeat in January at the PalaDozza in Bologna and then left very little room for the opponents. Birarelli and Kaziyski (who, like Stoytchev, came back after a year in Turkey) contribute in a significant way to the clinch of the fourth championship, but also Colaci, Lanza (who played a whole amazing championship), as well as two unpredictable players at the beginning of Play Offs: the opposite hitter Mitar Djuric (arrived just for the final phase of the season after a year in Korea) and the setter Simone Giannelli, a 18 year old reserve. Throughout the season, the diagonal holder was in fact composed by Zygadlo and Nemec, who did their part to get the first place finish in the regular season. In the most delicate moment, however, Stoytchev played the double joker, definitely surprising the opponents. The resounding and immediate explosion of the director from Bolzano (at the end mvp of the championship) allowed Trento to have even more energy to keep the opponents at bay, while the Greek offered a great help to Lanza and Kaziyski on high ball. After a victory on each side in the first two races, with a respected field factor, Trentino Volley won the next in just three sets. The most significant seal obviously came in game 4 at PalaPanini with a monstrous performance by the whole team. Sebastian Solé's first half in the break phase ended the match, which unleashed the joy of the four hundred Trentino fans who came to Emilia on Wednesday evening.
It was an unforgettable and particularly significant victory, given that from that very season the Serie A1 championship had officially become "SuperLega". The first name to appear in the roll of honour of the new name was that of Trentino Volley. Surprisingly, but with absolute merit.