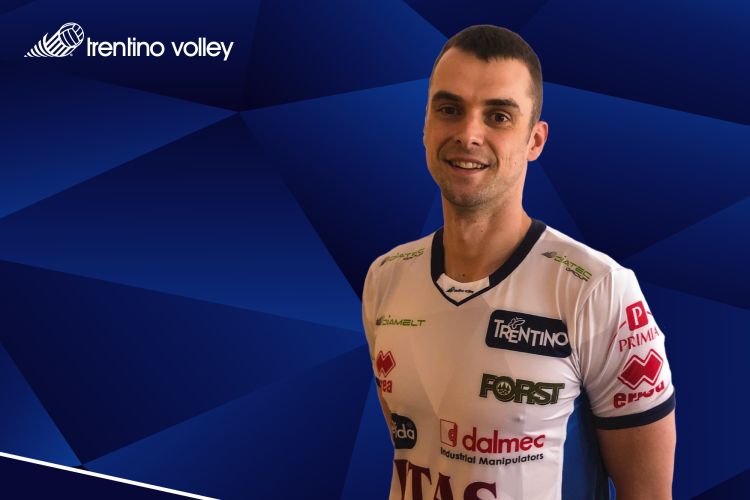 Trentino Volley's 2020 summer transfer market continues with a big hit. Our club has further strengthened its set of spikers, guaranteeing for the next two seasons the signing of the Italian-Dutch spiker Dick Kooy.
The 32-year-old spiker will be one of the two players in place 4 in a squad that in this area of the court can also count on the confirmation of the Cuban Luis Sosa Sierra and the final fitting into the first team of the rookie Alessandro Michieletto. Kooy arrives in Trento after a very good season in Piacenza, at the peak of a career in which he has often been able to shine in the Italian championship, e.g. the seasons in Modena and Macerata, before playing seasons in Poland, Turkey and Russia, which gave him an even more international dimension. Since he returned to play in the SuperLega in October 2019, he has been an Italian player to all intents and purposes, having acquired his passport just over a year ago; he has also joined the Italian national team since 2019. With Gas Sales he has confirmed that he is an excellent offensive finisher, scoring 324 points in nineteen matches with 47% in attack and being in the top ten of both the absolute scorers and the ace-men of the 2019/20 regular season.
"We've been following Dick Kooy closely for many seasons and we're happy that he's coming to Trento right when we think it could be the peak of his career - said President Diego Mosna - . I am convinced that for maturity and technical skills he will be able to play at his best in Trentino Volley jersey".
"I know Dick Kooy well for having brought him to Italy, to Modena, already in 2009 - declared Trentino Volley General Manager Bruno Da Re - so I'm pleased to find him in Trento, because I consider him an excellent player. He is a physical and technical talent and I'm sure he will be able to give a great contribution in a season that hopefully will be full of satisfactions for him and for all Trentino Volley fans".