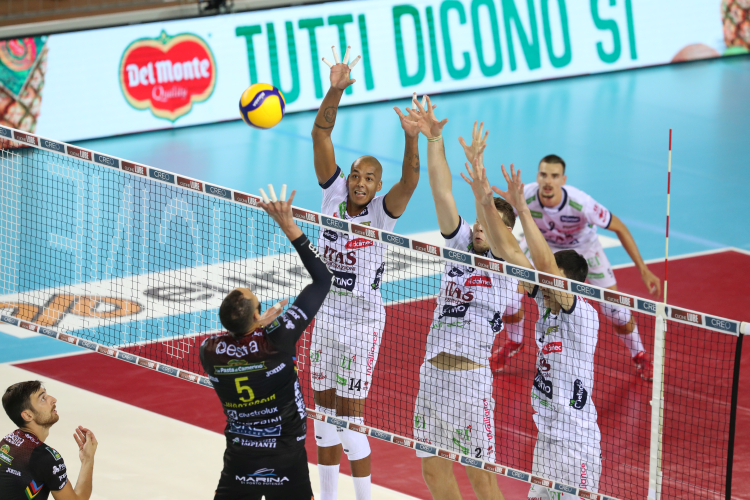 The match report. Itas Trentino shows up in Civitanova with Lucarelli and Lisinac still behind in terms of condition; Lorenzetti, therefore, confirms last Sunday's starting six by placing Giannelli as setter, Nimir opposite spiker, Cortesia, and Podrascanin middle blockers, Kooy and Michieletto spikers and Rossini libero. There was no change to the initial line-up not even for Cucine Lube Civitanova which places De Cecco as setter, Rychlicki opposite spiker, Leal, and Juantorena spikers, Anzani and Simon middle blockers, Balaso libero. The hosts had the best impact on the game: with Simon first and then De Cecco, they started to let loose from the nine-meter line (4-7 and 6-10). Lorenzetti interrupts the game, but at the restart, apart from a cue from Nimir (attack and ace for 10-12), the giallo-blù team never managed to get back on top, actually losing more and more contact (14-18, 15-20, and 18-25) under the strikes of Leal and Anzani. In the second set, Itas Trentino tries to change gear, relying on the inspiration of Giannelli at setting and at service and on the attack incisiveness of Nimir, who scores the points of the first real giallo-blù advantage of the match (from 8-8 to 11-8). De Giorgi's time out has the desired effects, because in the second half his team immediately finds the breakpoint of the tie (Rychlicki's block on Nimir and Anzani's attack) and then runs away (12-15). Michieletto and Nimir bring the two teams closer together (19-20), then Kooy takes care of scoring the points of the draw and overtaking (23-21). Trento keeps the advantage tight and goes to 1-1 thanks to Podrascanin's first half (25-22).
In the third portion of the game, the two teams alternate in the lead in the first half; Itas Trentino was better at the start (4-2), then Lube with Leal goes forward (7-9). The giallo-blù team makes up for it with Kooy (10-11), but then again has to leave room for important actions of the hosts (13-16, 16-20) thanks to Anzani and Juantorena. Lube defends the advantage well and gets ahead 2-1 at 19-25.
Itas Trentino is back on top in the fourth set, regaining a consistent advantage (6-4, 12-8). The hosts split up (15-10), they lose further contact also because Trento no longer concedes anything (20-14) with merciless Nimir and Michieletto in the changeover phase (25-20).
In the tie break, the Cucine Lube team begins to thrill (1-4), legitimizing the attempt to continue the challenge until the golden set, which materializes on 11-15.
The play-off part lives on the edge of balance until 7-7, then the hosts fly to +2 (7-9, team Lorenzetti). Nimir does not fit the new parity with the service (11-11); the decisive starting point is Juantorena, who defeats Nimir (12-14), then Michieletto attacks out for the final 12-15 which sends the Marchigiani to the Final.