Cortesia: "Supercup has been a useful experience for this amazing team" 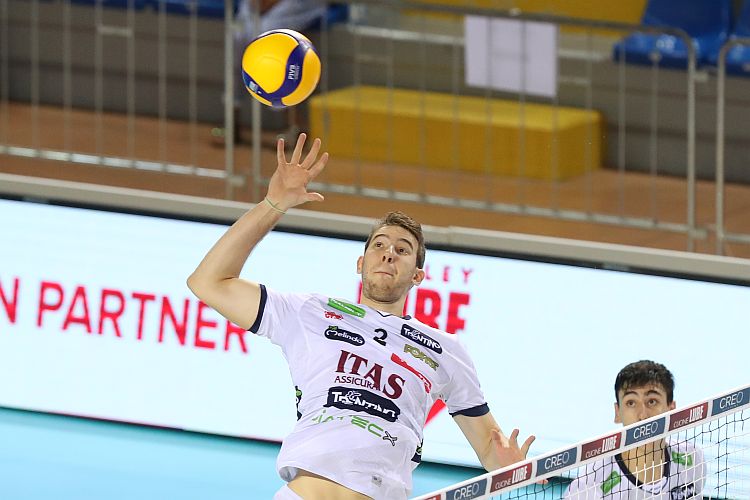 One rest day to recharge the batteries before concentrating on the preparation for the beginning of the SuperLega Credem Banca 2020/21, on 27th September in Padua. Itas Trento came back from Marche during the night, now the players can enjoy their Monday off, after the near win on Sunday at the Eurosuole Forum; despite the absence of Lucarelli and Lisinac, the gialloblù lead the play until the golden set against Cucine Lube team, just before losing only 12-15.
“We cannot hide it, we regret not having won but saying that playing in that area brings us misfortune, would be the worst thing we could say right now - explained the young middle blocker Lorenzo Cortesia - . During last seasons I wasn’t a player of this team, but basing on what we did on Sunday I can say that we played with a light heart, without any conditioning nor fear. Our team has been built to be a worthy opponent of the main Italian and international teams, and we’ve already shown it during the first two official matches. The adventure we lived playing in Supercup, during the last 7 days, has been a useful experience for this amazing team; the team is very close and we have a good feeling. We get along well, both on the field and in life, also thanks to the human qualities of Giannelli, he is a great captain on every level. On Monday we’ll go back to the gym head-on, we want to work and grow up, we can only improve”.
“I did not expect to play the first two official matches as first-string – kept on Cortesia, tonight he is the guest of “RTTR Volley”, a program of the partner-tv, oddly live at 10pm instead of at 9pm - . For me, it has been an important test bench, above all for my mental endurance: I’m glad to have shown that I am able to stand this pace and this level. I have to improve my ability at serve, well I could do all the fundamentals better; it’s normal facing some highs and downs at this moment of the season. I want to improve on any level and do something good, which here in Trento means only one thing: win”