SuperLega on field for round number 7 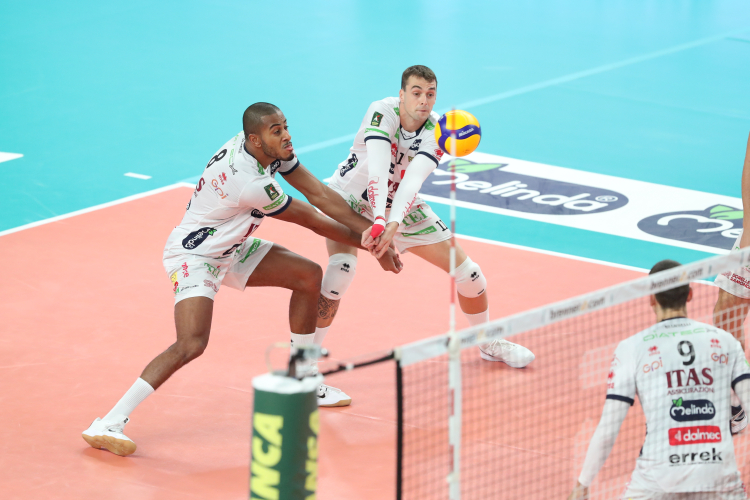 This weekend on field for the 7th round of regular season SuperLega Credem Banca 2020/21 On 25th October, Itas Trentino will play another away match at the Arena in Monza against Vero Volley. Starting whistle scheduled for 6 pm, live on Radio Dolomite and live streaming on Lega Volley Channel www.elevensports.it.
HERE ITAS TRENTINO  Gialloblù team is preparing to play the first of three away matches during the next 7 day;the goal is to play well since the beginning, in order not to lose positions on the ranking and feel again the feeling of the victory. A positive result would be a giant leap towards the other 3 matches of the week: on Wednesday and on Thursday against Dinamo Moscan in Amriswil (Switzerland) and against Champions League’s home team in Cisterna on Sunday. “Monza signs the beginning of a intensive and fundamental period of our season, but as always is better to think of one match at a time – said coach Angelo Lorenzetti introducing the match - . On Sunday we want to taste the victory again and play well because our team is able to, as it has already showed during a important part of the match against Perugia. Showing a determined and confident approach will be important, but at the same time we’ll need to show continuity of play and accuracy, we can’t let our guard down because our opponent need points for its ranking, as well as we need”.
The team can not count on the hitter spiker Michieletto (still positive to Coronavirus), but will count on the other 12 effective players, all them have trained regularly also today, just before leaving for Brianza. In this occasion, Trentino Volley will try to get the 595th victory in its story (of 855 match played), number 285 on away field. In regular season, gialloblù team has won 160 of 253 matches, the one against Monza will be number 98 for Simone Giannelli as captain, in total he has already played 282 times wearing gialloblù skirt.
THE OPPONENTS Vero Volley is waiting for the first match against Itas Trentino of the season, Fabio Soli won’t be on the bleachers anymore. Last Sunday, after the defeat in Cisterna, the Society decided to relieve the coach that had guided the team during the last 2 years of his post and to recruit Massimo Eccheli. After a great beginning at the PalaPanini in Modena during the first round, Monza did not show continuity in results, the team lost on the home field against both Milano and Civitanova, on away field in Verona and finally won at the tie break in Padova. But now rosa team can count on an important player: Filippo Lanza, the hitter spiker from Verona (as well as the middle-blocker Galassi he grew up playing in gialloblù juniores team) and began to play at the 4th round of regular season. He will assure some good opportunities to the team, above all among the spikers as did Orduna and a good beginning of italian adventure showed by the Turkish opposite Lagumdzija (who scored 113 points during 6 matches). Among the players, other good ones are the Czech spiker Dzavoronok (he’s playig his 5th season wearing Vero Volley skirt and the American middle-blocker. Only 200 specatators will be allowed in the Arena.
PREVIOUS MATCHES The teams have already played together, and gialloblù team won (15-1). The only victory achieved by Monza was the one on its home field, 3-2 on 4th March 2018. The most exciting match was the one on 23rd December 2018, second last match played between them two in Lombardia, gialloblù won at the tie break after 165 minutes of play, the match was the longest of its story. On that field, Itas won 5 other times, 4 of them in just 3 sets - one of them was the last playes between them. 16Th January 2020, victory after 25-19, 31-29 and 25-21. In the past, Itas had played 7 times(and had won all them) against another team from Monza: Acqua Paradiso , except for only one time, Arena Monza (once PalaIper and Candy Arena) has always let the team smile at the end of the matches. Important are also the matches won 3-1 on 27th December 2009, 30th January 2011 and 8th January 2012.
REFREES  the match will be directed by Marco Braico (from Torino, in Seria A since 2003) and Marco Zavater (from Rome, in Serie A from 2008), both will direct for the 4th time in SuperLega. The last time Braico directed a match with Trentino Volley was over 1 year and a half ago, (on 25th April 2019- Civitanova-Trento 3-0, while Zavater was on field on 23rd January 2020: victory in 3 sets, at the quarter-final of Italian Cup.
RADIO, INTERNET AND TV The match will be told live by Radio Dolomiti starting from 6pm. Radio frequencies can be found on the website www.radiodolomiti.com, there it will also be possible to listen to the chronicle live.
It will be possible to watch the match streaming on “Lega Volley Channel” www.elevensports.it  - paid service. In order to avoid the connection problems occurred last weeks Eleven Sports improved the service: all the matches are available on MyCujoo, a online platform that works in collaboration with Eleven . All Eleven Sports subscribers will have free access to MyCujoo and will have the possibility to watch the matches without any additional costs. Only for this time, will be possible to watch the match live and free on Facebook page of Lega Pallavolo Serie A www.facebook.com/LegaVolleySerieA/posts/3091829784254216.
On Tv catch-up on 26th October at 9.30pm on RTTR, tv partner of ITAS TRENTINO.
On the net is possible to follow the news of the match point-to point (www.legavolley.it) and on  www.trentinovolley.it  and on the Social Network (www.trentinovolley.it/facebook,  www.trentinovolley.it/instagram and www.trentinovolley.it/twitter).