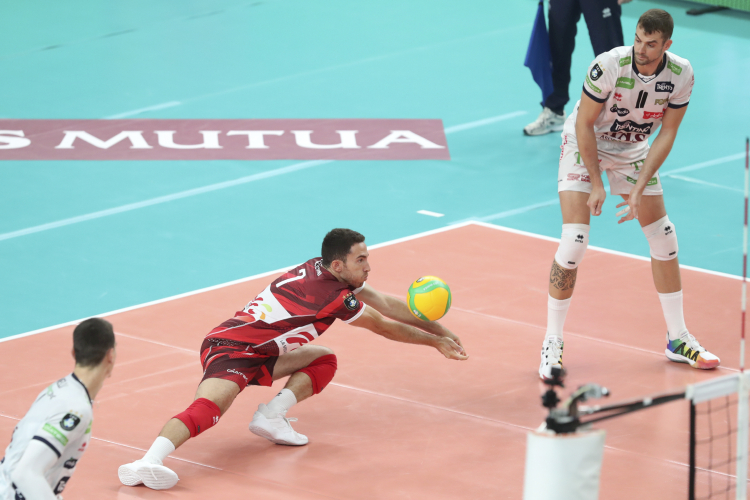 The match report. The starting six aren’t a particular surprise; the team initially proposed by Angelo Lorenzetti has Giannelli at serve, Nimir Abdel-Aziz as opposite spiker, Lucarelli and Kooy in place 4, Lisinac and Podrascanin as middle blockers, Rossini as libero. Dinamo Mosca has to do without Sokolov (not even on the bench) and has Pankov at serve, Shkulavichus as opposite spiker, Deroo and Podlesnykh as spikers, Vlasov and Likhosherstov as middle blockers, Kerminen as libero. The beginning of the match is all in favour of the gialloblù team: Nimir blocks Podlesnykh, who then makes a mistake and lets the gialloblù go at 3-0 and then at 4-1. Quickly the opponents make a comeback, already on 8-8, taking advantage of the gialloblù team difficulties on reception and defence. Trento doesn’t give up; it starts again with Nimir and at the attack (17-11), using the realization of the Dutch opposite but also the good management of Giannelli in the control room. Mosca counters with Deroo until 17-14, then leaves definitely room to the gialloblù, which quickly goes to 1-0 (25-18), with Lisinac who does well on defence.
Also in the second partial Trentino Itas starts good, a moment in which Kooy does well (attack and successively ace for the initial 5-1). Nimir is unstoppable and almost alone increases the gap (8-2) with its attacks; later Dinamo tries to keep up at least the pace of the ball change (14-9), but without getting closer to the opponents, because the gialloblù team doesn’t allow it, exploiting the entire arc of the net in attack (16-10). Lisinac does well at serve, achieving the absolute advantage (+8, 20-12), which then increases until +10 (25-13) because Nimir goes at serve as well, who scores three consecutive aces.
On the wave of enthusiasm, Trentino Itas doesn’t interrupt its wild action either at the third partial, led by Kooy at serve, who offers the first advantage (4-1). Nimir is still unstoppable and scores other points (8-4). In the central part of the set, the gialloblù scores again and always thanks to the Dutch couple (16-9), and later goes quickly towards 3-0, already at 25-16.