SuperLega on field for round number 8: the guide to Cisterna-Itas Trentino 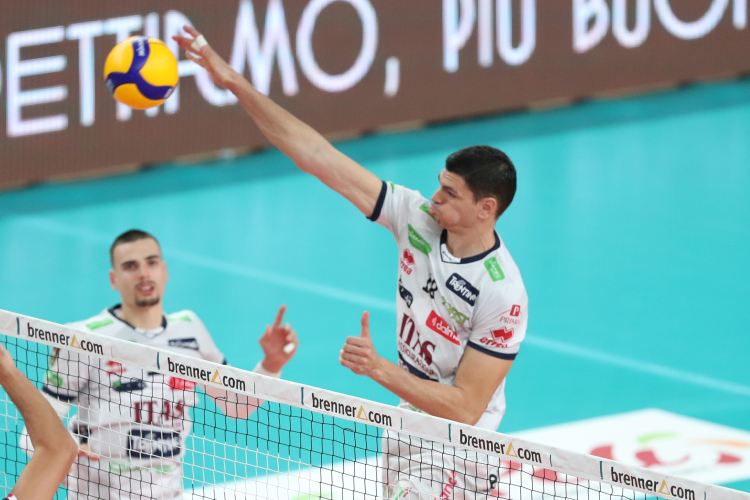 This weekend, on field for the 8th round of regular season SuperLega Credem Banca 2020/21 Itas Trentino will play for the 4th consecutive time on away field during the last 7 days: on Sunday 1st November the match against Top Volley at Palazzetto dello Sport in Cisterna di Latina. Starting whistle scheduled for 6 pm, live on Radio Dolomiti and live streaming on Lega Volley Channel www.elevensports.it
HERE ITAS TRENTINO  After having spent only one day in Trento, gialloblù team is leaving again, for the first trip in November looking for some points, important for the ranking. On away field, Angelo Lorenzetti’s team has shacked the ranking 3 times out of 4 matches, and this is the goal for the next matches too, as clearly said the coach.
“The qualification round for the Main Phase of Champions League played until last Thursday in Switzerland has been hard in all aspects, first of all the physical one. But it gave us good sensations and an excellent play’s feedback. – declared - . We need to play in a such a good way in Championship too and we want to recover and keep winning 3-0, as we did in Amriswil. Our opponent team Cisterna needs some points too, so we need to concentrate and play all the fundamentals good since the very beginning”.
The coach can’t count on the hitter spiker Michieletto, but there will be all the other 12 players, who completed the preparation for the match, the last training, on Friday night. Today, the team will spend the whole day travelling to Lazio. In this occasion, Trentino Volley will try to get the 597th victory in its story (of 858 match played), number 286 on away field. In regular season, gialloblù team won 160 out of 254 matches on away field, for Giannelli this will be the 100th time playing as captain. He’s the younger captain, only two played more than him and are Kaziyski (204) and Lanza (150).
THE OPPONENTS For Top Volley Cisterna, the beginning of the season was characterized by defeats (6 out of 7) and by physical problems of which is suffering Sabbi, and which forced first Tubertini (on bleachers until the ko during the 4th day against Ravenna) and then his successor Kovac to choose Szwarc as substitute despite the fact that the Canadian player (now Polish citizen) is a hitter-spiker. The arrival of the Serbian coach brought some new air, indeed the team scored the only 4 points they have until now, thanks to 3-1 on home field against Monza and at the tie break in Verona last weekend. Among the players, many are very talented: the hitter spikers Tillie (5th best receptor in Championship) and Randazzo, the two seetters Seganov and Sottile (the Serbian player often first-string, sometimes replaced by the Sicilian one) and the German middle-blocker Krick (very good at block). The coach can also count on Oreste Cavuto, who grew up playing in gialloblù juniores team and now often on the field thanks to his ability at attack, as he showed in Verona.
PREVIOUS MATCHES Verona and Latina are on place 5 among the teams that most played against Itas during official matches: 39 times. Only Civitanova (76), Modena (74), Piacenza (57) and Cuneo (47) played more times. Itas won 31 times, the other team only 8. For 11 times consecutively Itas has been winning. The last victory for the opponents was on 13th April 2014 (1-3 in Trento), the match was valid for playoff for place number 5. On home field, Latina was luckier: five victories out of 20. Among the 15 victories achieved by Trentino Volley in Lazio, there are also the last 6, the last one was on 27th November 2019, 3-1 and the sets 26-28, 18-25, 25-19, 22-25 Capitan Giannelli mvp.
REFEREES The match will be directed by the Alessandro Cerra (first referee form Bologna in Serie A, since 2014) and Rossella Piana (from Carpi - Modena,  regular form 2005 and international referee since 2014), respectively at 3rd and 4th season in SuperLega. Both have already directed other matches during other days of this regular season. Cerra during the lucky match in Padova (3-0 on 27th October), Piana during the first defeat on home field (0-3 against Verona, a week after).
RADIO, INTERNET E TV The match will be told live by Radio Dolomiti starting from 6pm. Radio frequencies can be found on the website www.radiodolomiti.com, there it will also be possible to listen to the chronicle live.
It will be possible to watch the match streaming on “Lega Volley Channel” www.elevensports.it - paid service. In order to avoid the connection problems occurred last weeks Eleven Sports improved the service: all the matches are available on MyCujoo, a online platform that works in collaboration with Eleven . All Eleven Sports subscribers will have free access to MyCujoo and will have the possibility to watch the matches without any additional costs. Only for this occasion, the match will be broadcast live and free of charge on Eleven Sports You Tube Channel www.youtube.com/watch?v=eZq7aQ6IOt0.
On Tv catch-up on 2nd November at 9.30pm on RTTR, tv partner of ITAS TRENTINO.
On the net is possible to follow the news of the match point-to point (www.legavolley.it) and on  www.trentinovolley.it  and on the Social Networkv www.trentinovolley.it/facebook  www.trentinovolley.it/instagram e www.trentinovolley.it/twitter).