On Wednesday there is the 9th turn of SuperLega: the guide to Itas Trentino-Vibo Valentia 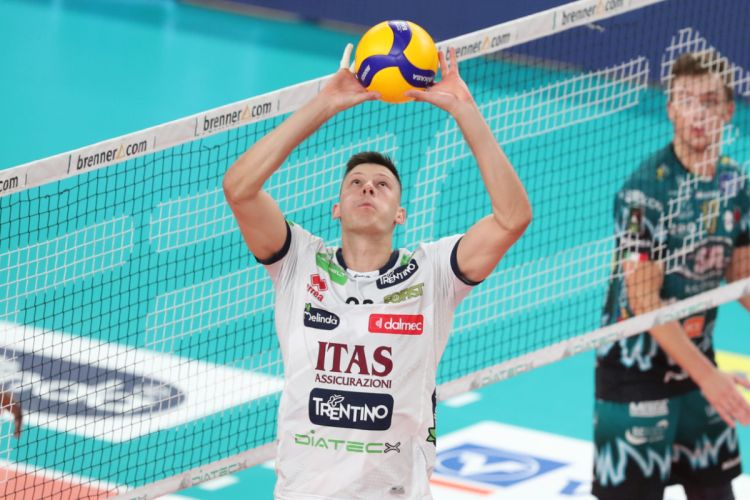 Itas Trentino returns to the field on Wednesday 25 November to play the match of the ninth turn of SuperLega Credem Banca 2020/21, not disputed the last 8 November. The opponent of the match scheduled at 19 at the BLM Group Arena is Tonno Callipo Calabria Vibo Valentia. Live coverage on Radio Dolomiti and live streaming on Lega Volley Channel at www.elevensports.it.
HERE ITAS TRENTINO After over three weeks of wait and postponements, the gialloblù team returns to the field for an official match, but it has to do it in this emergency period, considering the positivity of the opposite spiker Argenta and the two setters of the team Giannelli and Sperotto. With Kooy, Rossini, and Sosa Sierra who are back from just a few days, the coach Angelo Lorenzetti has to use an absolute experimental formation that could expect the return to the control room of the Dutch Nimir Abdel-Aziz, after six seasons spent playing as the opposite.
“The current absences we have to deal with force us to use alternative and new solutions for this match, considering that the players who returned to the team do not have yet the physical autonomy to play an entire game – said the gialloblù coach, introducing the match - . During these last days, we have worked to try to bring out the strong points we have with this team and to hide the weaknesses”.
To offer another alternative, on this occasion there will also be the setter of UniTrento Volley of Serie A3 Filippo Pizzini (1999) and the spiker Stefano Bonatesta (2002), who have regularly trained with the team in the last period. On this occasion, Trentino Volley will hunt for the 598th victory in its history (in 859 official matches), the 311th in Trento where it didn’t win from the first October (3-0 on Novi Sad in Champions League) and where it didn’t play from 18 October (1-3 with Perugia). In regular season the gialloblù Club has won 195 of 255 home matches played so far.
THE OPPONENTS Tonno Callipo Calabria Vibo Valentia shows itself at the BLM Group Arena from the top of its current third place in the rankings, shared with Milano thanks to six victories in the first nine played matches. The victory of nine days ago in Civitanova Marche was surely the most prestigious one, because it was obtained on the field of Lube that during 2020 has previously lost only once at home. In the first round the giallorossi, much renewed compared to last season, has shown all the qualities of a team that can count on the expert and efficient coaching of Saitta, who is very good at using the team strong points. Statistics in hand, those that have made the most are the French spiker Rossard (fourth bomber of the championship with 1623 points) and the Brazilian opposite spiker Drame Neto, but also in the centre the presence of the transalpine Chinenyeze (first middle blocker in the rankings of scorers with 105 winning balls) was particularly noticeable (best striker of SuperLega by weighted average and fourth blocker overall). The Calabrians have shown that they are often at ease in away matches during the first round: eleven of sixteen points currently achieved in the ranking arrived not in Vibo Valentia, but in Milan, Padua, Ravenna and, in fact, Civitanova Marche.
PRECEDENTS Trentino Volley and Callipo Sport Vibo Valentia have a long tradition of challenges behind them, which began more than sixteen years ago (3 October 2004) with the first official match in regular season (away win at the tie break for the gialloblù). The report of thirty-three precedents, among which five Play Off matches and two of the Italian Cup stand out, is clearly in favour of the Club in via Trener for 28-5. Trento has twelve victories in the last fourteen played matches; the recent success of Vibo Valentia refers to 3-2 home win on 11 December 2016. The last direct match is on 19 January 2020, always at the BLM Group Arena, during the second round match of the previous championship (3-1 for the gialloblù, with partials 25-23, 25-23, 13-25, 25-21). In Trento, in the previous sixteen matches, the Calabrians have won only once (3-1 on 7 October 2012).
THE REFEREES The match will be directed by Daniele Rapisarda (from Udine, in top league from 2002 and internationally from 2011) and Giuseppe Curto (from Gorizia, in top category from 2013), respectively in the fifth and fourth game of the season in SuperLega. The last precedent compared to Trentino Volley for Rapisarda dates back to 9 February (success at the tie break in Padua), while for Curto it corresponds to 2019 Christmas day (3-1 at home with Ravenna).
RADIO, INTERNET AND TV The match will have a live and full coverage on Radio Dolomiti, in connection with the BLM Group Arena starting at 19 with the voice of Stefano Piffer. Radio frequencies can be found on the website www.radiodolomiti.com, where you can listen to the radio update in live streaming. It will be possible to watch the match streaming on “Lega Volley Channel” at www.elevensports.it. In order to avoid the connection problems occurred last weeks, Eleven Sports improved the service: all the matches are available on MyCujoo, an online platform that works in collaboration with Eleven. All Eleven Sports subscribers will have free access to MyCujoo and will have the possibility to watch the matches without any additional costs. Only for this occasion, the match will be broadcast live and free of charge on Eleven Sports YouTube Channel at www.youtube.com/watch?v=WkDktF-bw1s.
On Tv catch-up on 28 November at 15 on RTTR, tv partner of ITAS TRENTINO.
On the Internet is possible to follow the news of the match point-to point on the Lega Pallavolo Serie A website (www.legavolley.it) and on www.trentinovolley.it and on the Social Network (www.trentinovolley.it/facebook,  www.trentinovolley.it/instagram e www.trentinovolley.it/twitter).
BLM GROUP ARENA BEHIND CLOSED DOORS Following the ordinances in the latest Prime Ministerial Decree, the facility in via Fersina will remain closed to the public for the first time in the history of Trentino Volley, allowing only a few accredited media and field staff to enter.