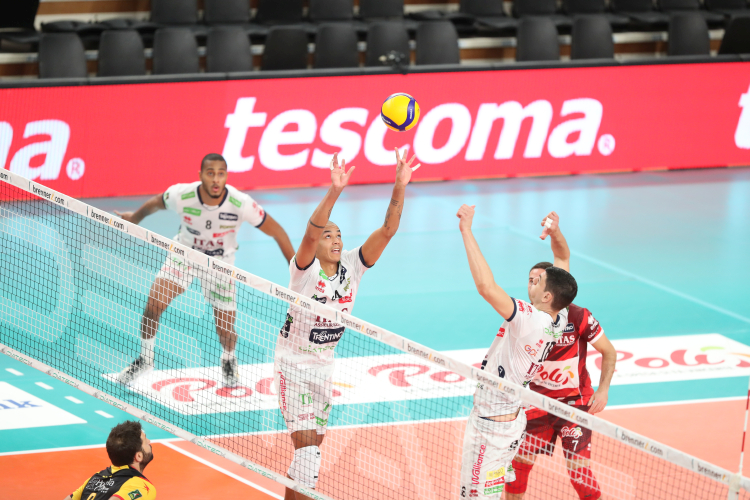 The match report. Without the opposite Argenta and the two role setters in the squad Giannelli (for the first time not on the scoresheet after 295 consecutive official matches - he had not missed one since the 2014/15 season) and Sperotto, Itas Trentino returns to BLM Group Arena (behind closed doors) after 38 days bringing Nimir back to the role of setter and proposing Michieletto diagonally to the Dutchman; in attack Lucarelli and Kooy, while in the center the Serbian couple Podrascanin-Lisina, with Rossini libero. Tonno Callipo Calabria responds with Saitta as setter, Drame Neto opposite spiker, Defalco and Rossard spikers, Cester and Chinenyeze middle-blockers, Rizzo libero. The home team had the best impact on the game, with a block from Michieletto on Chinenyeze who initially set the first advantage (4-2), immediately contracted by Vibo (5-5) thanks to a mistake by Kooy. Saitta blocks Lucarelli twice in a row, allowing guests to get a first idea of how their evening would be (8-10). Lorenzetti interrupts the game, but at the resumption, another block by Rossard on the Brazilian and a mistake by Michieletto further widen the gap (10-14). The Frenchman also signs an ace on the line bringing the Calabrians to +5 (11-16); Trento loses confidence and further contact (13-20), struggling reasonably in the changeover phase. Vibo Valentia pulls straight on its way and closes the set on 18-25.
After the change of field, Itas Trentino returns with another attitude; Lisinac begins to block everything that passes over his head (5-3), Michieletto attacks effectively (8-4) and Kooy stings in service (10-5). At 12-6 Baldovin has already exhausted the time outs available, but the giallo-blù team shoots straight up to 15-10, then suffer the opponent's comeback that passes through Rossard's services and Cester's blocks (16-16). Trento restarts with Lucarelli's block on Drame Neto (19-17) and with Michieletto's attack from place 2 (21-19). The hosts keep the advantage tightly (23-21) and win the set with a block of Kooy on Drame Neto (25-22).
In the third set Tonno Callipo Calabria returns showing its attitude in the breakpoint phase; Trento starts well with Nimir serving (3-0), but Drame Neto and Defalco quickly overturn the score (3-6 and 5-8). The hosts return to make themselves heard with Kooy (10-12), but it is only a moment because then the opponents widen the gap again with Defalco (ace for 11-16). In the final part of the set, Vibo Valentia tries to control the large margin gained (17-20, 21-23), despite Lorenzetti's team making the maximum effort to get back into the race (Lucarelli's ace for 22-23). At the sprint Rossard's hand-out is decisive (23-25).
Itas Trentino did not break down and started up again in the fourth set, a moment in which Lucarelli also made himself heard on the block, imitating Lisinac (7-4). Another block, this time by Nimir, forces Baldovin to interrupt the game at 9-6, but when he returns to the field it is always the hosts who dictate the pace (12-9). Vibo made the maximum effort and with Rossard equalized the score at sixteen, before the block of Drame Neto on Kooy (18-19). Trento counter-attacks with an error by the Brazilian himself (21-22), but a mistake by Michieletto offers the first match ball to the guests (23-24) which immediately transform it thanks to Rossard (23-25).