SuperLega, the return round starts: the guide to Itas Trentino-Kioene Padova on Sunday 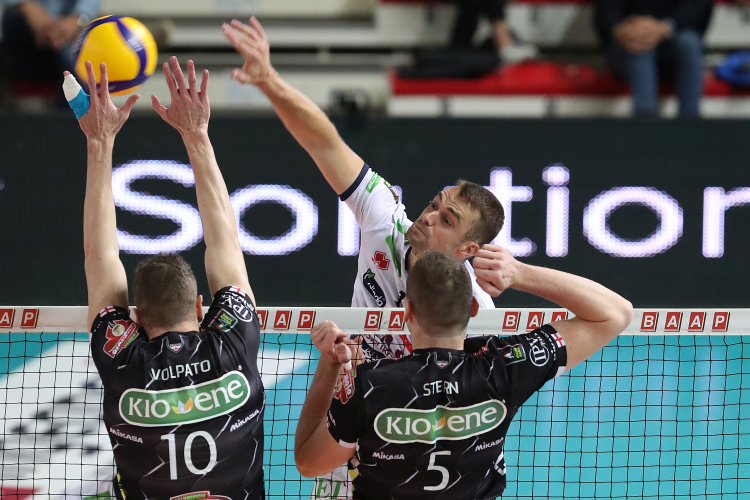 The second round of the regular season of SuperLega Credem Banca 2020/21 kicks off this weekend. The descending phase of the Italian top league for Itas Trentino will begin at the BLM Group Arena (still behind closed doors), where Kioene Padova will arrive on Sunday 29 November; match valid for the twelfth absolute round. Kick-off scheduled for 7 pm, with live coverage on Radio Dolomiti and live streaming on Lega Volley Channel at www.elevensports.it.
HERE ITAS TRENTINO The match with Padova will open a very busy week for Itas Trentino: in eight days there will be five official matches to play, also taking into account the three Champions League matches to be played at the BLM Group Arena between Tuesday and Thursday and the one away in Verona scheduled for Sunday 6 December.
On this occasion Trentino Volley will hunt for the 598th victory in its history (in 860 official matches), the 312th in Trento where it has not won since October 1st (3-0 over Novi Sad in the Champions League). In the regular season, the giallo-blù Club achieved success in 196 of the 256 home games played so far.
THE OPPONENTS Kioene Padova faces the second round as the only team that has never had to deal with a stop due to the Coronavirus. The team of Jacopo Cuttini is the only one not to have missed even a round of the championship, because even when his opponent was not available (as in the case of the home match with Ravenna on November 15) he still found a way to anticipate another commitment (in Modena). The Venetians are therefore certainly the sextet with the most pace in their legs, as demonstrated on Sunday evening with the 3-1 win in Verona. The match in Verona was the second victory of the regular season for the team; previously only one other away success had come (in three sets in Cisterna) and two home points with Monza and Milan. Despite the third to last position in the standings, Kioene has so far stood out above all on the block (the second team of the whole tournament for points scored) and for some individuals who are making the goal of salvation possible. Above all, the Slovenian opposite spiker Stern, who has already scored 195 times (best scorer of the tournament), the very reliable libero Danani (a guarantee in reception), but also the middle-blocker Vitelli (best blocker of the tournament together with Anzani).
BACKGROUND The thirty-seventh official match in history between the two clubs will be played on Sunday; the balance is clearly in favor of the giallo-blù colors, which came out as winners in thirty circumstances, but the Venetians rejoiced in two of the last five games played, including the most recent one played at the BLM Group Arena (20 November 2019, 2-3 with partial of 25-20, 20-25, 19-25, 25-23, 19-21). In the eighteen previous officials played in Trento, Padua has won only one time: 7 November 2004, 1-3 with the former MVP Meszaros. The first round match, played last September 27 at the Kioene Arena, had Seen the victory of Itas Trentino 3-0: partials of 27-25, 25-15, 26-24 with Nimir Abdel-Aziz MVP (22 points including 9 aces).
THE REFEREES The match will be directed by Dominga Lot (from Santa Lucia di Piave - Treviso, in the top serie since 2010 and international since 2018) and Massimiliano Giardini (from Verona, in the top category since 2014), respectively in the fourth and fifth game of the season in SuperLega. Lot's last precedent with Trentino Volley dates back to 16 February (home defeat against Modena), while for Giardini it was a year ago: 27 November 2019, Cisterna-Trento 1-3.
RADIO, INTERNET AND TV The match will be reported directly and in its entirety by Radio Dolomiti, in connection with the BLM Group Arena starting at 7 pm by Stefano Piffer. The frequencies to tune into the media partner are available on the website www.radiodolomiti.com, where it will be possible to listen to the commentary in live streaming.
There will also be live streaming video on the "Lega Volley Channel" web space, at www.elevensports.it. Eleven Sports' offer has been expanded, making all games available also on MyCujoo, a streaming platform with which Eleven has already started structural collaborations in other markets. All Eleven Sports subscribers will have free access to the service on MyCujoo and will be able to watch their own games also on this additional platform without further payments. The match will also be broadcast in free live streaming on the Eleven Sports YouTube channel, at the direct link www.youtube.com/watch?v=3GtkSvivToc.
The full deferred broadcast of the match will be broadcast on Monday 30 November at 9.30 pm on RTTR, TV partner of the Company in via Trener.
On the internet, point-to-point updates will be handled by the Lega Pallavolo Serie A website (www.legavolley.it) and by the same www.trentinovolley.it and will always be active on the giallo-blù Social Networks (www.trentinovolley.it/facebook, www.trentinovolley.it/instagram and www.trentinovolley.it/twitter).
BLM GROUP ARENA BEHIND CLOSED DOORS Following the ordinances in the last Prime Minister's Decree, the building in via Fersina will remain closed to the public, allowing entry only to a few accredited media and the staff assigned to the field.