Champions League, Trentino Itas wins 3-1 in Berlin in the first round of the quarter 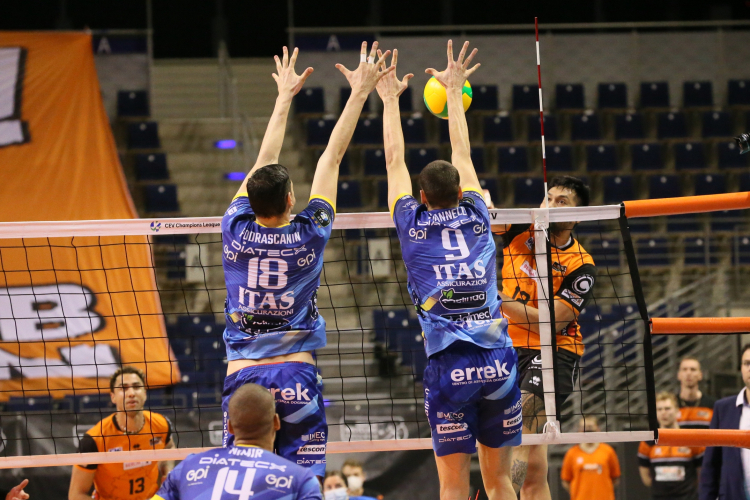 The race in the final draw of 2021 CEV Champions League starts on the right foot for Trentino Itas. Tonight, again on the field in Germany as two weeks before, the giallo-blù team has in fact conquered the Max Schmeling Halle in Berlin in four sets in the first leg of the quarter-finals, keeping intact the seasonal winning streak in the competition (10 victories in as many games played).
The first step to be able to grab the qualification to his sixth semifinal in history in the maximum continental trophy was taken by showing a determined approach to the match and finding the technical, mental and physical strengths to repel the opponents' attempt to reopen the match after the daring final of the third set. After an excellent start, characterized by great attention to the block and a very effective service, the match has in fact become more heated from a competitive point of view in the central part; the giallo-blù team had the merit of winning the second set in the sprint and then immediately raising their heads after losing the third to the advantages, again showing off a great volleyball in the fourth set. Once again the contribution offered by the opposite Nimir Abdel-Aziz, best scorer and MVP of the match was decisive thanks to 28 personal points, 71% in attack, three aces and one block, but the performances of Podrascanin (11 with 88% in the first half and 4 blocks), Lisinac (12) and the captain Giannelli were also very important. Protagonist of a positive entry during the match is also Alessandro Michieletto, good at immersing himself in the agonistic atmosphere of the second set and taking away certainties from the opponents with winning blocks (three on Patch only) and positive receptions. To reach the goal Angelo Lorenzetti’s team will have to win at least two sets in the return match, which will be played in Trento in seven days.

Below is the match report of the first leg of the quarter-finals of 2021 CEV Champions League played tonight at the Max Schmeling Halle in Berlin.