In the Champions League final for the 5h time, the 13th in the international context 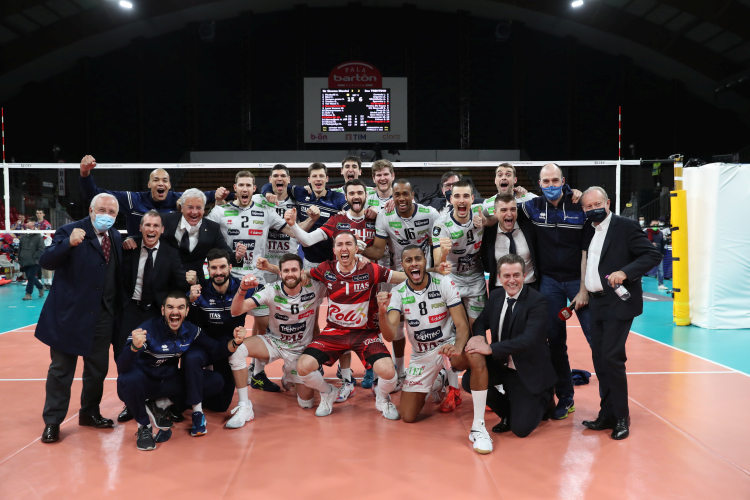 The relationship between Trentino Volley and European competitions will always be particularly special and full of moments of extraordinary significance. The result obtained this evening at the PalaBarton has in fact allowed the via Trener club to continue to keep open the incredible continental saga that has distinguished it since 2009. The Club of President Mosna today has in fact officially earned the pass for what will be its eighth European final ever, the thirteenth international, the fifth only in the Champions League.
The final match of the maximum continental tournament, scheduled for Saturday 1st May at the AGSM Forum in Verona, will therefore be yet another appointment with history for an association already capable of winning the world title for Club five times, three times the Champions League and on one occasion the CEV Cup. The album of memories linked to the CEV events fills more and more with pages: the first is the one linked to the evening of April 5, 2009 in Prague, when opposed to IraklisThessaloniki the giallo-blù team won for 3 -1, winning the title of European Champion after overcoming Macerata in the Italian derby in the semifinal; the second refers to May 2, 2010 and the clear success on Dinamo Moscow at the Atlas Arena in Lodz; the third, unforgettable, happened on 27 March 2011 with a 3-1 victory in the final against Kazan at the PalaOnda in Bolzano. The most recent refers to the success at the tie break in Istanbul on 27 March 2019 against the hosts of Galatasaray, which earned them the victory of the CEV Cup.
In the 2014/15, 2015/16 and 2016/17 seasons, the only three defeats accused in a continental final, remedied only in the golden set against Dinamo Moscow on 11 April 2015 and with Tours on 15 April 2017 in the CEV Cup and only at the tie break again against Kazan in Krakow (Poland) in the 2016 CEV Champions League.
Leaving aside the single event, it should be emphasized that the match just won is the thirty-fifth final ever for Trentino Volley; the calculation also highlights the twenty-two most recent games played in the national field: 8 Scudetto Finals (2008, 2009, 2010, 2011, 2012, 2013, 2015 and 2017), 7 of the Italian Cup (2010, 2011, 2012, 2013, 2015, 2016, 2017) 7 Italian Super Cup (2008, 2010, 2011, 2012, 2013, 2015 and 2018).
The balance of the games that assign a title sees the giallo-blù team victorious in eighteen out of thirty-four circumstances: the peculiarity lies in the fact that Trentino Volley has won nine of the twelve international finals in which it has taken part. In addition to the Champions League (2009, 2010 and 2011), five finals of the Club World Cup must be added to the incredible roadmap, the first four played in Doha against Belchatow (3-0 on 8 November 2009 and 3-1 on 21 December 2010), Jastrzebski (3-1, 14 October 2011) and Cruzeiro (19 October 2012, 3-0) and the last in Czestochowa (2 December 2018) against Civitanova.