In the yellow-blue team there is room also for the spiker Daniele albergati, grown at home 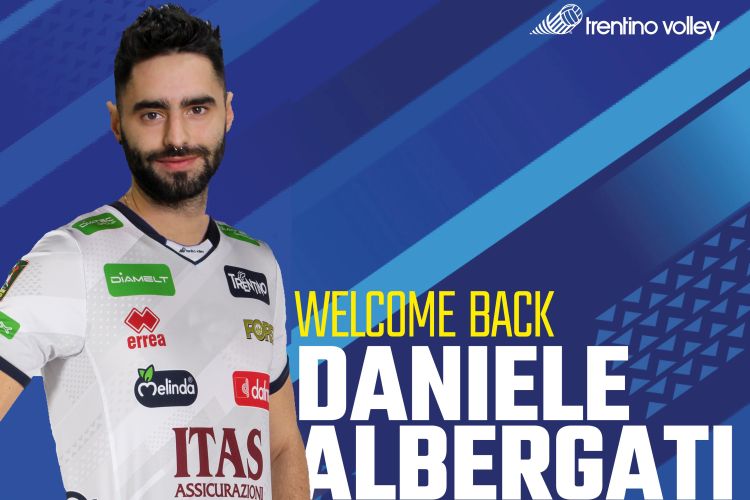 Together with Cavuto, De Angelis, and Michieletto, in the team 2021/22 there is room for another player grown in the Youth Sector. He’s the spiker Daniele Albergati, twenty-eight years old and two meters in height, who arrives only after a long experience between Serie A2, A3, and B, unlike all the others who arrived in the first team right after having ended the run in the yellow-blue nursey. He’s going to be the element that complete the line of attackers of high ball available to Angelo Lorenzetti.
Albergati has the most interesting characteristics in his physicality and capacity to perform different roles (spiker of place 4 or opposite spiker); also for this reason he was chosen by the yellow-blue Club, which continued to follow him with attention and inspected him periodically at the end of every season, thanks to the summer training at the BLM Group Arena. Concluded the experience in the youth sector of Trentino Volley, the career of Daniele developed between Bolzano, Motta di Livenza (where he won a championship of Serie B), Bergamo (his city of birth), and Portomaggiore, a company in which he disputed the latest championship of Serie A3 in the role of opposite spiker, scoring 386 points in twenty-two matches.
“It’s good to open the doors of the first team to a player like Albergati who many years ago was in our Youth Sector, but before now he has never played in SuperLega – explained the President Diego Mosna - . All of this means that Daniele has never lost hope to arrive at high levels but that, at the same time, also Trentino Volley continued to follow him with interest and attention, as we usually do with all the guys we launch in the national categories. With him, there are going to be four athletes in our new team who grew in our nursery; all of this represents a great pride and the demonstration of how much this Society believes and invests in young people".
Albergati is the twenty-second player of the Youth Sector of Trentino Volley who arrives in the first team.