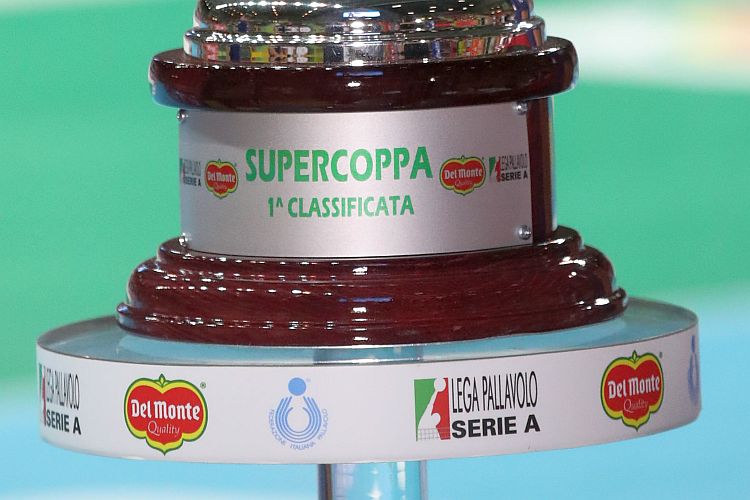 As usual, the officialization of the schedule of regular season of the next SuperLega Credem Banca removes the veil of the other two seasonal manifestations organized of the Lega Pallavolo Serie A: Del Monte Super Cup and Del Monte Italian Cup.
After the last edition in which the formula was changed to offer the opportunity to play more matches, the two competitions will return to be played in the ways that previously characterized them.
Del Monte Super Cup 2021 will be assigned again during a Final Four, which is played between Saturday 23 and Sunday 24 October in a location yet to be defined. Contrary to what happened in the past, it isn’t going to be the event that will open the Italian volleyball season, but it will be disputed after two rounds of regular season to allow the fourth participating teams to be familiar with the game mechanisms in the meantime. The four teams qualified for the semifinals of Play Off Scudetto 2021 will compete for it; as seeded number three, Itas Trentino will face Sir Safety Conad Perugia (seeded number two) in what is likely to be the second match on Saturday 23 October. The first should be Cucine Lube Civitanova-Vero Volley Monza, as per regulation. For Trentino Volley, the one that opens with the match against the team from Umbria will be the eleventh participation ever (in the latest twelve editions) at the competition. The match with Perugia will be repeated for the fourth time in the semifinals; in the past it was played in 2017 (in Civitanova, win by 3-1 of Sir), 2018 (yellow-blue win by 3-0 at the PalaBarton), and in 2019 (again in Civitanova and another loss by 3-1).
Del Monte Italian Cup 2022 will return to be assigned with the traditional formula of the final ranking that immediately opens with the quarterfinals. The first eight classified at the end of the first round of SuperLega will access it, which will face each other in a single match to be played on Sunday 2 January 2022 at the home of the best classified according to the classic pairings: 1^-8^, 2^-7^, 3^-6^, 4^-5^. The Final Four is going to be organized in the weekend of 22-23 January 2022 in a location yet to be defined. The first date for Itas Trentino is going to be 19 December 2021, the day in which it will be played the thirteenth turn (last of the first round). On that occasion, it will be necessary to be among the top eight of the regular season ranking, thus detaching the ticket for the twentieth yellow-blue participation in the competition.