Season 2021/22, the subscriptions campaign for the first round 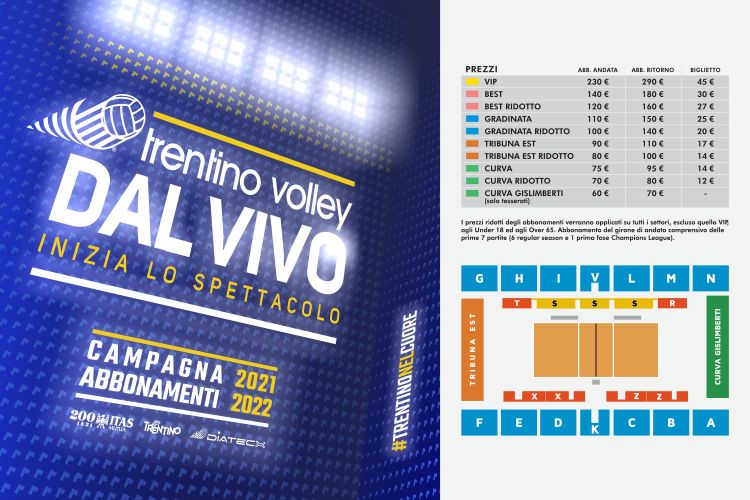 Starting again by leaning on the enthusiasm of its fans. With this goal, Wednesday 15 September, Trentino Volley will start the subscriptions campaign for the season 2021/22. Having to deal with the pandemic and the restrictions that also marks the following months (available only 50% of capacity of the BLM Group Arena and chessboard layout of the public inside), the yellow-blue Club inevitably had to decide to propose a card that includes only the first seven official home matches of Itas Trentino and that expires the 19th December (date of the last match of the first round); all of this to reduce the risk to not have matches due to possible new closures and at the same time to give room to a new layout of seats for the rest of the season, in case the capacity becomes wider.

Below all the details of the Subscriptions Campaign 2021/22 of Trentino Volley:

SUBSCRIPTION. The card is going to be put on sale from Wednesday 15 September and exclusively at the offices of Trentino Volley of street Trener 2 in Trento. It will be valid until 19 December and will include the first seven official matches that Itas Trentino will dispute at the BLM Group Arena: the 6 of the first round of regular season of SuperLega and the first home match of the pools phase of Champions League.
PREEMPTION AND PRIORITY. The subscribers of the season 2019/20 and the owners of #TRENTINONELCUORE Card 2020/21 are going to be the first to choose their seats inside the BLM Group Arena and can benefit from this special treatment until Thursday 30 September. From Friday 1 October, the sale will be open and without restrictions in all the rest of the available seats.
REDUCTIONS. The reduced prices are going to be applied to the over 65 and, for the first time, to the under 18 in all the sectors (except VIP). The owners of #TRENTINONELCUORE Card 2020/21 will have the right to a specific price.
SEATS AND SECTORS. The BLM Group Arena will adopt, at least initially, the chessboard layout of the available seats to maintain the distance of a meter between one spectator and the other, like required by the protocols currently in force. For this reason, it’s not possible to practice the preemption of the numbered seats occupied in the past. Five sectors, all numbered: VIP, Best, Gradinata (in English Terraces), Tribuna Est (in English Gallery East), and Curva (in English Stand). Every subscription refers to a specific seat at the BLM Group Arena and it’s impossible to change it in case the capacity of the stadium is increased to more than 50%.
VOUCHER. Those who in 2020 have required the refund voucher for the part of the subscription not used in the 2019/20 season, can use it when purchasing the 2021/22 card.
GREEN PASS (EU DIGITAL COVID CERTIFICATE) AND MANDATORY MASKS. Only the owners of the Green Pass (EU digital COVID certificate) can enter the stadium and they must wear the mask (which must always be worn). The validity of such certification is going to be verified at the entrance of every match by the security.
IMPORTANT NOTE. If for reasons related to the pandemic and beyond the control of Trentino Volley, some matches have to be played behind closed doors, the subscription isn’t going to allow entry at the BLM Group Arena. If, on the other hand, entry is allowed to a number of people lower than the number of subscriptions issued, Trentino Volley itself will establish the entry criteria based on current regulations in order to allow everyone to attend the greatest number of events. Any reimbursements will be made only if a specific Decree Law is arranged by the Ministry.
SECOND ROUND. If the protocols arranged by the competent authorities allow it, in the coming months Trentino Volley will also sell the subscriptions for the second part of the season, which will include the matches of remaining regular season and the pools phase of Champions League.