Gold European for Alessandro Michieletto: "Nothing is impossible, thanks Trentino Volley" 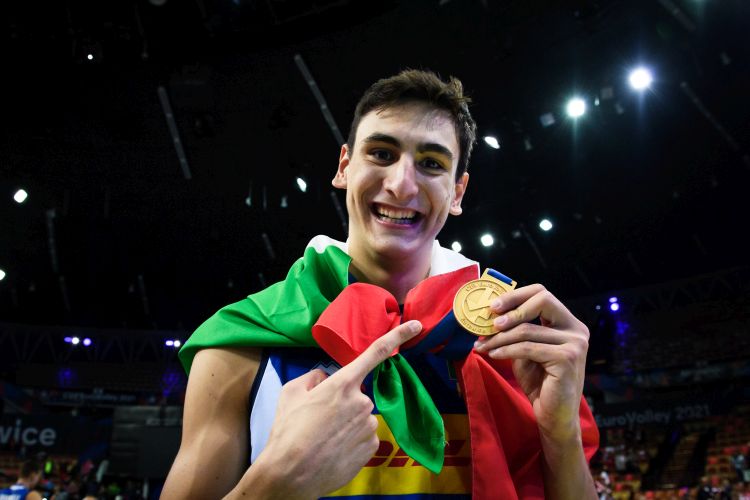 A day after the incredible win of Italy in Katowice in the Final against Serbia, shock and pride are the first feelings of Alessandro Michieletto. Returned in Italy this morning, the spiker grew in the Youth Sector of Trentino Volley doesn’t leave the gold medal he has just won (he always keeps it around his neck) and talks about his fantastic first twenty days as a protagonist.
“We have done something incredible – admitted to the microphone of Trentino Volley Tv - ; at the beginning, I believe that few, including us, thought that we could win. However, the group has been fantastic, and we have shown to everyone that the impossible don’t exist. I’m very proud, also because we have had very little time to prepare this European; match after match we have found ever greater rhythm and ever more awareness of our means. This has helped us to win all the matches, even the more complicated ones; the Final with Slovenia has been a suffering, because our opponents have put us under pressure between service and blocking, but with the team spirit and the willpower we have succeed to invert the trend and win. The success in Katowice has been unexpected and it was the cherry on top on a summer that I have always lived to the fullest, in an incredible way. Thanks to Trentino Volley, which has always believed in me, has given me space, and made me grow, putting me alongside great champions and professionals. If I was able to be ready for events such as the Olympics and the European Championship, it’s thanks to this Club and to those who have trusted me”.
“I want to dedicate this gold medal to many people, but especially to my family and the team – concluded Alessandro - . I will find a substantial portion of this group at the BLM Group Arena from October to defend the colours of Trentino Volley and we are very happy to be together in Trento. We are young, strong, and Italian, and we can't wait to entertain our audience”.