A fantastic Itas Trentino: 3-1 on Monza, wins the Supercup! 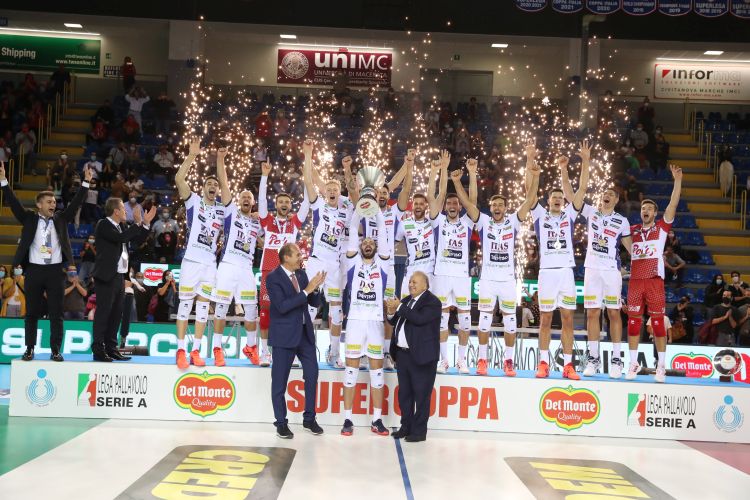 The twenty-two season of Trentino Volley history immediately saves an extraordinary accomplishment! Overcoming by 3-1 the Vero Volley Monza in the Final of this afternoon, played at the Eurosuole Forum in Civitanova Marche, Itas Trentino won the Del Monte® Super Cup 2021, the third of its history.
For the yellow-blue Club, the nineteenth title arrived at the end of a perfect weekend of games, in which Angelo Lorenzetti’s team has shown all the qualities that until a few days ago could only be hoped for or foreseen in the medium term. With a performance full of importance from all the points of view (technical, tactical, and attitudinal), Trento returned to the Marches to reclaim the trophy that it had been missing in Italian competitions since 2015 (win of the title in Modena) and had been waiting for, more generally, over two and a half years (win of the CEV Cup in Istanbul at the end of March 2019).
Getting the upper hand of Monza wasn’t as simple as it might suggest the reading of the box score: after a difficult start, also for specific merits of the yellow-blue attack and block, Eccheli’s formation confirmed to be one the most beautiful surprises of the early season, fighting tooth and nails between the second and third set before definitively raising the white flag in the fourth set. To control it, it was needed a fantastic block-defence system and a great performance at the net, with Sbertoli good at keeping in the match all his attackers: every one of them went in double figures for the second consecutive day. In the end, there are the 21 points of Matey Kaziyski (MVP of the Final Four, also thanks to three blocks and an ace), the 18 of Michieletto (with 58% in attack, two blocks, and two aces), and the 16 Lavia (with 62%), but fundamental for the win were the Serbian middle blockers Lisinac (16, 73% in the first half, three blocks, and two aces) and Podrascanin (10 with 4 blocks and 55% at the net), and the continuity in reception of Zenger. Today, Captain Kaziyski returned to lift a trophy with Trentino Volley jersey, as happened many times in the past.

Below the report of the Final of Del Monte® Super Cup 2021, played this evening at the Eurosuole Forum in Civitanova Marche.