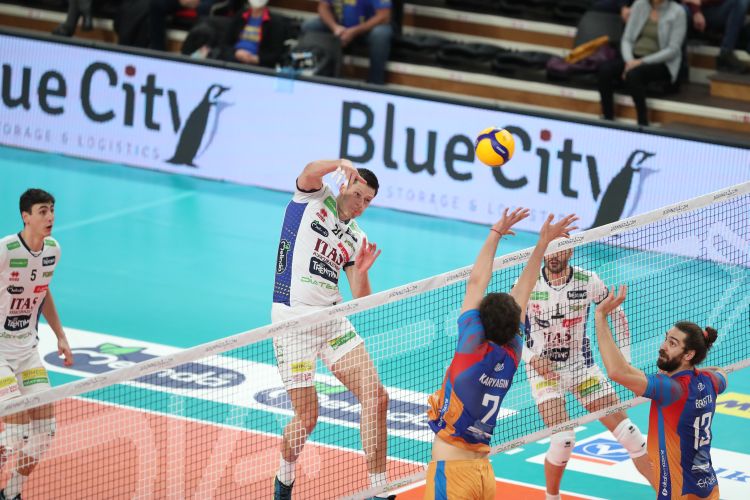 Match report. For the in-or-out challenge, Angelo Lorenzetti goes on the safe side and confirms the usual starting six: Sbertoli at the direction, Lavia as opposite, Michieletto and Kaziyski as attackers, Podrascanin and Lisinac at the centre, Zenger as libero. Vero Volley Monza has to do without Grozer and Grozdanov, so they have Orduna as setter, Davyskiba as opposite, Dzavoronok and Karyagin as laterals, Galassi and Beretta at the centre, Federici as libero. Sbertoli hits hard at set and Lisinac defends twice: the Brianzoli team takes refuge in a technical time out on 5-2 and try to react soon after (7-6), led by Davyskiba (attack and ace). Itas Trentino opens up the gap again with a block (Kaziyski's on the Belarusian) and goes to 10-7, then up to 14-9 when the Brianza's 2-player attacks out, leading to Lavia's attack. The final part of the first half is then controlled without too many problems by Lorenzetti's team, who manage the wide advantage (17-12) and even increase it on some occasions (19-13, great point by Michieletto, 22-14, another Davyskiba mistake). The change of court happens  already on 25-16, after another mistake from the opponents, this time is Karyagin's fault.
The match continues like the first set; it's Lavia (attack, block and ace) who immediately puts the set on the right track for the hosts who quickly assert their supremacy at the net (3-, 7-2 and 8-3). Monza interrupts the game but can't get into the match; Trento spreads with Podrascanin (block and first half for 12-4) and Lisinac (three more blocks for 18-6). At 20-8 (Davyskiba's mistake), the 2-0 is already done; only a couple of exchanges are needed to certify it, at 25-13 (Kaziyski's winning smash). In the third period, things don't change: the yellow-blue team immediately goes up to 6-3, but then suffers the reaction of Vero Volley, which with Davyskiba goes up to minus one (8-7). Kaziyski's attack, Lisinac's block on the Belarusian and Lavia's courage bring the opponents back within striking distance (11-7). Itas Trentino gets back on track and doesn't stop until almost the end (15-10 and 20-14), also because the break point phase continues to offer satisfaction with Kaziyski and Michieletto on the ball. The pass to Bologna is given on 25-21, after the Brianzoli team closes with honour, containing the defence.