SuperLega, Saturday afternoon at BLM Group Arena the advance of the 24th round 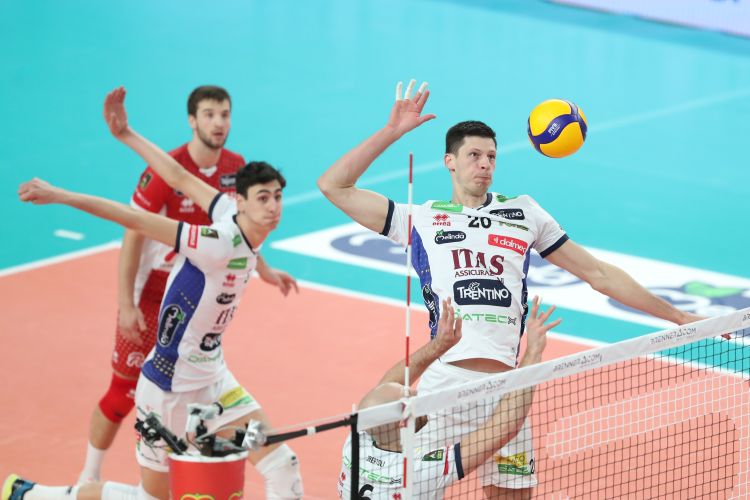 SuperLega Credem Bank on the pitch next week for the 24th round of the 2021/22 regular season, that will be entirely anticipated to this weekend instead of the original date of March 5th and 6th. Itas Trentino will be the protagonist of the first match of the day, waiting at the BLM Group Arena for Consar Ravenna in the early afternoon of Saturday 22 January. The beginning set for 3pm; live Radio Dolomiti and live streaming on OTT Volleyball World Tv.
ITAS TRENTINO The team Gialloblù is preparing to face its last home match of the month (out of four) of January; in the following two weeks, Kaziyski and his teammates will be on the stage in Istanbul, Monza, and Civitanova before playing again in Trento against Modena on February 6th.
“We will face a team as Ravenna, that has come back from a long time without official matches and will therefore have a lot of desire to play and try to put us in trouble, being able to support the engagement with a clear mind – explained coach Angelo Lorenzetti, during the presentation of the event – . On our side, we are happy to be able to play this match which, at the beginning of the week, was not even scheduled, because at this stage of the season we definitely need to keep our pace intact and continue the process of growth through official matches”.
The Trentino tecnique, in the 257th match on the bench of Trentino Volley, will be able to count on twelve players at his disposal, who will complete the preparation for the match with the training of tonight. For the Club of Via Trener it will be the 916th official race of its history, the 422nd ever at home, in which it will go in search of the 640th victory ever (the 335th at the BLM Group Arena).
THE OPPONENTS Saturday afternoon will be the first official game of 2022 for Consar RCM Ravenna, a team that has had to deal with several positive cases at Covid-19 in the last forty days and has therefore necessarily postponed all five matches originally scheduled between mid-December and today. The most recent match was played on 12 December 2021 (defeat in three sets at Cisterna), in the match that closed the first round of the Giallorossi with the last place in the standings and two points (scored in tie breaks that have been lost in Padua and Milan). In Trento, the team of Emanuele Zanini will try to resume the discourse interrupted in mid-December, finding the rhythm of the game indispensable to face in the best possible way also the following clashes in Taranto (January 26) and at home with Vibo Valentia (January 30). In the Romagna game, the reception line shines in particular (among the most reliable of the category thanks to excellent interpreters of the fundamental as Goi and Vukasinovic) and the effectiveness of the Dutch player Niels Klapwijk who, despite having played only twelve matches, is the fifteenth absolute bomber of the tournament with 183 points.
THE BACKGROUND Trentino Volleyball and Porto Robur Costa Ravenna will face each other for the 22th time in their history; the confrontation started in the 2011/12 season. The balance is clearly in favor of the Gialloblù by 19-2, but one of the two successes of the Romagnoli was won right in Trento, on February 3, 2016 at the tie break. The Gialloblù club has won in six cases by 3-1 (including the most recent home victory, on February 6, 2021) and in thirteen occasions by 3-0. The first match, played on November 10, 2021 at the Pala De Andrè, was won in three sets and ended with scores of 25-16, 25-23, 25-12 (Pinali mvp with sixteen points, 68% in attack and three aces). Trentino Volley has origins in Ravenna: in May of 2000, the President of the time Diego Mosna purchased the rights to the A1 Series from Valleverde Porto, winner of a Scudetto and three Champions Cups in the '90s.
THE REFEREES The match will be directed by Cesare Armandola (from Voghera - Pavia, on the position since 2017) and Andrea Puecher (from Rubano - Padua, in Serie A since 2003 and international since 2013), respectively in their first and ninth match in SuperLega 2021/22. The only previous match with Trentino Volley for Armandola dates back to the last home match against Ravenna (February 6, 2021, 3-1 victory), while Puecher during this season directed Trento-Monza 3-1 on November 14 and Verona-Trento 3-2 on December 26.
RADIO, INTERNET AND TV The match will be broadcast live by Radio Dolomiti, media partner of Trentino Volleyball. The frequencies to listen to the regional network can be found on the website www.radiodolomiti.com, where it will also be possible to follow the live radio commentary in streaming.
Also confirmed is the live streaming video on the OTT platform "Volleyball World TV"; the service is subject to payment. For further information on how to use the service, please consult www.welcome.volleyballworld.tv/faq-it.
On television, a summary of the match will be aired on Monday, January 24 at 21.45, on RTTR - media partner of Trentino Volley.
On the internet, every update will be provided by the website of the Lega Pallavolo Serie A (www.legavolley.it) and by www.trentinovolley.it and will always be active on the Gialloblù social networks (www.trentinovolley.it/facebook, www.trentinovolley.it/instagram and www.trentinovolley.it/twitter).
TICKETS AND METHODS OF ENTRANCE For this event, Trentino Volley will let access to a limited number of spectators in the stands of the facility in Via Fersina; everyone must have a SUPER GREEN PASS (Covid-19 green certification obtained through vaccination or healing) and a ffp2 mask, to be worn at all times while inside the facility. The race is the fourth included in the season ticket of the second half of the season; on the card is indicated the entrance door to be used to access the stands. Ticket presale is active at any time on the internet by clicking https://trentinovolley.vivaticket.it/it/event/itas-trentino-ravenna/174487. The BLM Group Arena boxes will be available starting at 1:45 pm, the same time that the arena entrances will be opened.