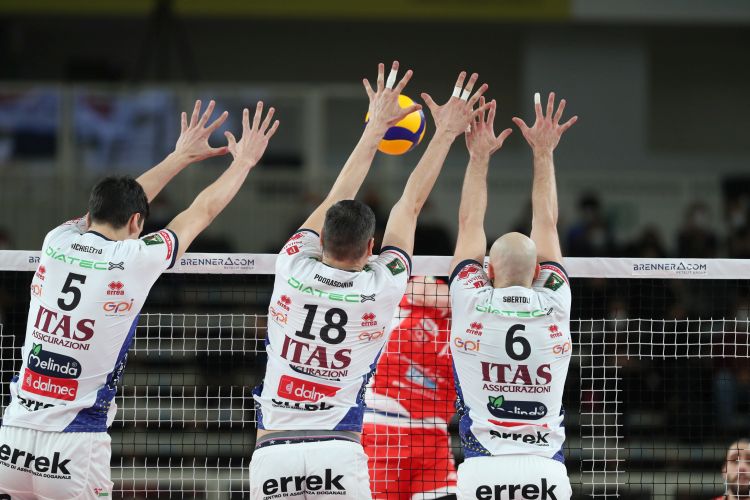 The match report. Angelo Lorenzetti chooses the classic starting six: Sbertoli as setter, Lavia as opposite spiker, Kaziyski and Michieletto at place 4, Lisinac and Podrascanin as middle-blockers, Zenger as libero. Consar RCM Ravenna comes back into the Championship after forty days of absence playing with Queiroz as setter, Klapwijk as opposite hitter, Vukasinovic and Urlich as hitter spikers, Fusari and Candeli as middle-blockers, Goi as libero. The host team started with fatigue, the side out has some difficulties being fluent and Ravenna does not give anything away, taking the team in advantage (1-3 and 3-5). Just a good turn at service by Lisinac and everything goes right and the escape starts (5-5 and 8-5) with the block that starts to make break points one after the other. In the central part of the set, the yellow-blue team goes away with no problem, also because the team of Romagna makes lots of mistake in reception and in attack (10-7 and 13-8).  At the score 15-10, Itas Trentino relaxes for few seconds (15-12, Michieletto’s mistake at net), but it is just a moment, because Lavia takes the team back on the right track (17-13). At 18-14, Podrascanin realizes his thousandth block in his Italian career, celebrated by his teammates and the staff in a time-out expressly called by Lorenzetti where Podrascanin receives a specifically designed T-shirt. Potke’s block seems to get the host team closer to the success of the set, which arrives with 26-24 because the guest team is able to make points till a score of 22-23, taking advantage from a decrease of tension in the half of the court of Tretino. The advantages are decided once more by Ravenna’s mistakes.
The second set begins once again with some fatigue by Itas Trentino. Vukasinovic, Ulrich and Candeli drive Consar to the score of 1-5 and then to 5-8. The host team keeps the pace at the side out (7-10 and 13-15) but they make fatigue to score in the break phase, also because Ravenna give few chances. What is needed is a good rotation of Michieletto at service to achieve a score of 15 (Kaziyski’s slash). The balance lasts till 18-18, then the yellow-blue team advances because of Ljaftov’s mistake (on the court since the beginning of the first set for Klapwijk) and with Lavia’s block (20-18, time out Zanini). Podrascanin, with a block, increases the gap (23-20), allowing his team to live the end of the set in a simpler way than the previous one (25-21, another winning block by the Serbian player).
In the third match there is no more space for a point-to-point contest. Kaziyski’s services (player that takes the team to 5-0) sets the direction of the set, without that Ravenna is able to react as the team did in the previous sets. After, Itas Trentino increases its advantage (10-4, 13-6, 19-8) thanks to an excellent strength in every fundamental phase of the break point. Everything starts from the service (very insidious the ones of Sbertoli and Lisinca), but then it follows with blocks (always Podrascanin) and the counterattack (more often of Kaziyski). The 3-0 with a score of 25-14, with other three points of Matey mvp.