1.000 blocks in Italian competitions for Podrascanin: a special uniform to celebrate him 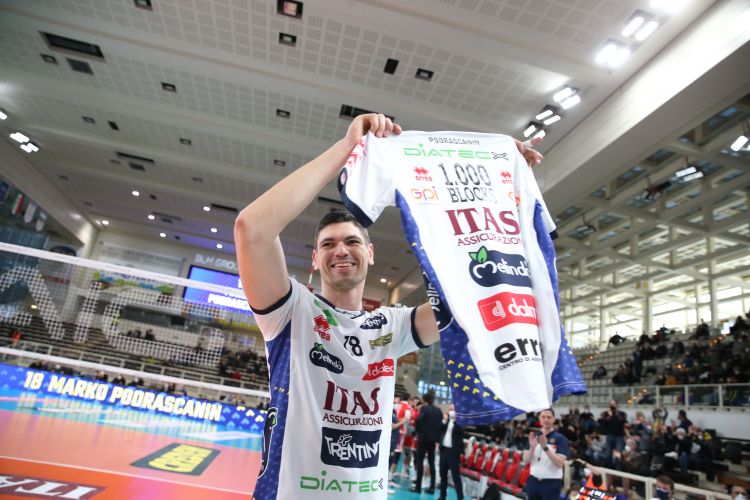 Podrascanin had been aiming for the quadruple figure since the beginning of the season: for a specialist like him it was just a matter of time, but the milestone was reached this afternoon in the match against Ravenna. The block against Vukasinovic in the 18-14 first set was the 1000th in Marko Podrascanin's career in the Italian competitions organised by the Italian Volleyball  Serie A League; an exceptional figure that the Serbian player has achieved in 476 matches and fifteen seasons in the Italian top division. The details speak of 931 blocks between the regular season and play offs and 74 in the Coppa Italia. To celebrate this anniversary in the best possible way, Trentino Volley had prepared a special commemorative uniform, which was handed over to Potke immediately after the 1000th winning block, a moment in which Angelo Lorenzetti deliberately called time out to let him experience this emotion to the full. In the all-time ranking led by Luigi Mastrangelo (1,448 winning blocks), Podrascanin is in ninth place (eighth is occupied by Andrea Lucchetta with 1,072 points) and is the only foreign player in the top ten. To find another active athlete, we have to look at the 37th place: Dragan Stankovic, with 620 points.