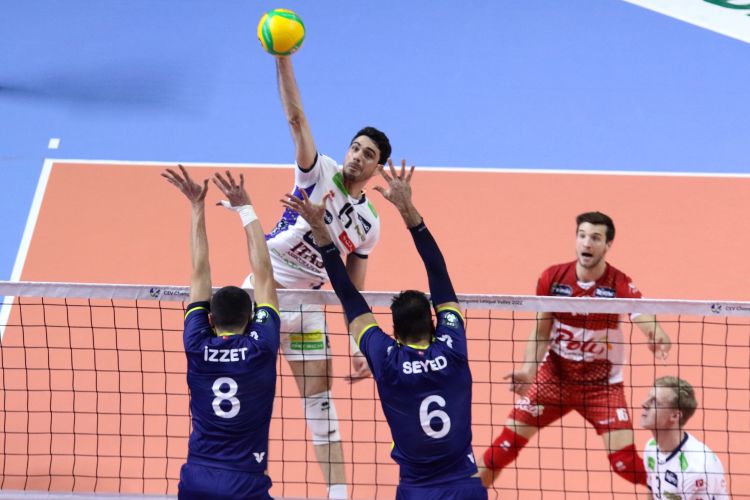 The first away match of 2022 gave Trentino Itas the result it had had in its objectives before the departure for Turkey. This afternoon, the Gialloblù team conquered the field of Istanbul, winning 3-0 against the hosts of Fenerbahce HDI in the fourth round of Pool E of the 2022 CEV Champions League; a success - the sixth in a row - that allows Lorenzetti's team to secure second place in the round with two days to go and that confirms the good start to the calendar year experienced by Kaziyski and his teammates.
Despite being without Lisinac, the team from Trentino was able to impose its own game on the hosts, showing how the relationship that ties it to the Burhan Felek Voleybol Salonu (the playing facility) is particularly special. In the facility where, less than three years ago, it won its first CEV Cup, Trentino Itas played a perfect game in all the fundamentals (10 blocks, 56% in attack, 55% in reception, only 14 errors between serving and dunks), never giving Fenerbahce a chance to breathe, who managed to raise their head only for a short part of the second set, until 16-16. Before and after that, Alessandro Michieletto (best scorer with fifteen points, four blocks, the only ace of the day and 67% at the net) and Kaziyski (11 with 45%) laid down the law and tipped the balance towards their team. D'Heer's performance was also to be haighlighted (9 winning balls, with 86% in the first half and three blocks) as well as Sbertoli's very lucid directing performance, at the end judged mvp.

Below the scoreboard of the fourth match of Pool E of the Main Phase of the 2022 CEV Champions League played this afternoon at the Burhan Felek Voleybol Salonu in Istanbul.