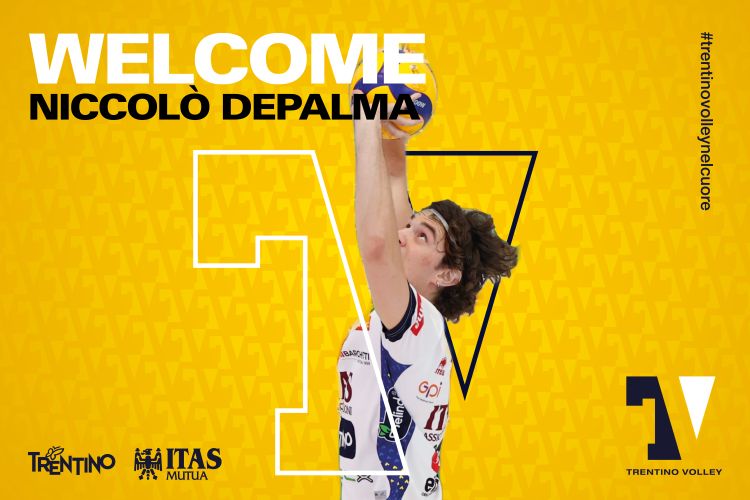 In the 2022/23 season Alessandro Michieletto will no longer be the only son of art in the SuperLega Credem Banca squad of Itas Trentino. In fact, with him there will also be Niccolò Depalma, son of Esteban (spiker of Argentine origin, in A1 in Rome, Modena and Montichiari, bronze at the 1988 Seoul Olympics and Scudetto in 1986) who for several years has made Trentino his home. Niccolò, on the other hand, was born in Trento twenty years ago and holds the role of setter; he will be the alternative to Riccardo Sbertoli in a staff that, in fact, has already been completed exactly one week after the conclusion of the Volleyball Market in the summer of 2022. This is yet another product of the yellow-blue Youth Sector that reaches the first team; after taking the first steps in the Argentario Calisio nursery, from the summer of 2019 Depalma arrived in Trentino Volley, gaining more and more important experiences and playing not only the category championships but also those of Serie C, A3 and B, the latter two with the UniTrento Volley shirt. From his father he inherited the great passion for volleyball and technique, which stands out not only when he dribbles but also when, for example, he serves in jumping with great dexterity.
"Niccolò’s arrival in the first team is one of those operations that offer me even greater pride and a sense of belonging to this Club,” underlined Trentino Volley coach Angelo Lorenzetti.  “A youth sector like the yellow-blue has always had the primary objective of offering players to the SuperLega squad, preferably setters. The technical, physical and mental leap that awaits him is not insignificant, but I am sure that, relying on the great motivation that distinguished him every time he trained with us in the past and every time he took the field with the 'UniTrento Volley will be able to take on this commitment. The Trentino Volley nursery has other young people who have the potential to take this step; I hope that Niccolò can be an example and a stimulus for all of them, so that they can face the season that awaits them with even greater determination”.
Depalma is the twenty-fourth player to join the first team of Trentino Volley from the Youth Sector; he will wear jersey 11, the number chosen to pay homage to his father who played his last season in Serie A1 in Rome in 1996/97 with that figure on his shoulders.