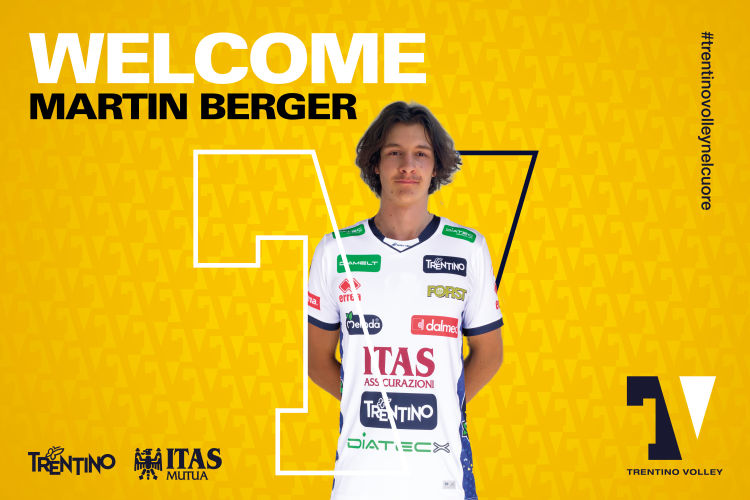 The last day of the 2022 SuperLega Summer Volleyball Market reserves one more incoming transaction for Trentino Volleyball. In fact, the official list of the Gialloblù roster, delivered this morning to the registration office set up in these days by Federvolley and Lega Pallavolo Serie A in Bologna, also includes the name of the very young middle blocker Martin Berger.
A South Tyrolean, class of 2003, originally from Bruneck, he was picked up in the last few hours from SSV Bruneck, the club where he had started playing just four seasons ago; he represents another Italian prospect that management and technical staff wanted to bring to the first team ahead of the new season. Until now Martin had played at most in the regional leagues of Serie C and D (in the last two seasons he did so in Sport Team Südtirol of Bolzano), showcasing interesting physical qualities that led him to experience this summer in Zocca (Modena), in the ranks of the Italian National Under-20 team. In the roster at Angelo Lorenzetti's disposal, he will offer an additional alternative at the center of the net to the confirmed trio Lisinac-Podrascanin-D'Heer, from whom he can draw important inspiration.
"Besides, Liske has always been one of my favorite players, it will be great to be able to play with him," explained Martin Berger after signing the contract "When I got the phone call from Trentino Volley I was almost scared: I started playing volleyball only four years ago and the leap forward that has been envisaged for me is really remarkable. I came from a C Series season and the SuperLega is something incredible and unexpected for me, but I am overjoyed for this opportunity. In Trento I will have the opportunity to improve my qualities, I am ready to give everything and to live this dream to the fullest, also because I know perfectly well that I am coming to a club that is very good at launching young players on the international scene."
"I am really happy that the Trentino Volleyball market closed today with an operation of this kind - are the words of coach Angelo Lorenzetti - . With the arrival of Berger we guarantee ourselves a young middle blocker of perspective who, although he does not yet have much experience at certain levels, was able to immediately put himself on the map with the National Under 20 team thanks to physical and learning skills that bode well for his future. I wish him to continue his blue summer together with Laurenzano, so that he will arrive in Trento with an even greater wealth of skills and enthusiasm."
Berger is the fourth South Tyrolean player to land on the first team, following Giannelli, Acuti and Dell'Osso, the latter two center-backs like him and starring in a couple of appearances over the past few seasons. He will wear the number 10, wich in the past has belonged to other youngsters such as Lanza, De Paola and Fedrizzi but also to players of the caliber of Grebennikov and Richard Nemec.