Flashes of a good Itas Trentino in Biella: Modena beaten at the tie break 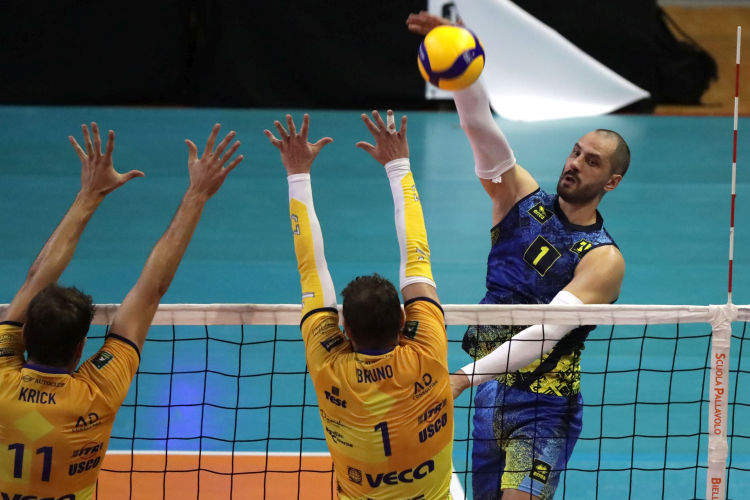 The four-way competition in Biella “Volley under Monte Mucrone” begins with an encouraging victory for Itas Trentino. During the first of the last two pre-championship tests planned for the weekend in Piedmont, the yellow-blue team beat Modena, winning 3-2 and performing a comeback from the derby A22 in a friendly game.
Regardless of the result, which created a great enthusiasm in the Trentino atmosphere, the most significant data came from the game itself. Even without all the effective members available (the libero Laurenzano will be back in Trento on Tuesday), the team coached by Angelo Lorenzetti confirmed its important qualities, especially in the break point phase and in particular in serve- (9 ace, three just from Sbertoli) and block fundamentals (11 winning, 5 from Podrascanin), which have always been the determining sprint to win the first, the fourth and the fifth set. Speaking individually, Lavia's 20 points, Kaziyski's great effectiveness at the net (12 with 55%) and the good entry of Džavoronok, author of a brilliant second half in place of the captain himself, should be highlighted.
On Sunday afternoon, in Biella, there will be Itas Trentino’s last pre-championship official competition: at around 6 p.m. the competition against Cucine Lube Civitanova (3-0 champions against Monza during the first semi-final of the four-way competition) will take place and it will give the first place to the competition.
Here’s the game report. Lorenzetti choose to restart from the starting six, often seen during the last season: Sbertoli as setter, Lavia as opposite spiker, Kaziyski and Michieletto as hitter spikers, Podrascanin and Lisinac as middle blockers, with Pace (the only news) as libero. Modena replies with Bruno as setter, Lagumdzija as opposite spiker, Ngapeth and Rinaldi as hitter spikers, Krick and Stankovic as middle blockers, Gollini as libero. The yellow-blue team starts with a step back on the attack (0-4 and 5-7), then the cooperation between Sbertoli and his teammates grows gradually and so, Trento takes off: it ties the score on 12-12, then an uncontrolled Lavia takes action, nicely backed up by Kaziyski (17-14). Giani stops the game but when they resume it, Michieletto (22-17) and Podrascanin’s aces (24-18) close the game early.
The match seems not to change in the second partial; the Emilians immediately try to stretch (3-5) but within a few exchanges they are caught and overtaken by their opponents thanks to the great net skills of Lavia and Kaziyski (8-5). Podrascanin makes his value felt with his winning blocks (13-8), but on +5, however, Trento loosens the tension and Modena returns to put pressure on Itas Trentino (13-13). The set continues point-to-point (17-17 and 20-20), before Ngapeth doesn't get on top (21-24), deciding, with the help of newcomer Sala (ace), the epilogue of the partial (22-25).
In the third partial, it is still Modena that immediately prevails (0-5), but Itas Trentino responds in short time, pressing hard on the accelerator with the service and the block (9-9). Again the confrontation is very close (13-10 and 15-15), at least until 17-17, then the Emilians hit with their serve and Trento concedes a few too many errors at the net (18-21). In this case it is Lagumdzija who protects the lead; the good entrance of Džavoronok (for Kaziyski) is not enough to reverse the trend: 22-25 and 1-2.
In the fourth period, Lorenzetti leaves Džavoronok on the court and also inserts D'Heer for Lisinac; his team's response is convincing: Itas Trentino takes the reins of the score right from the start (7-4 and 15-7) thanks to the incisiveness of the serve and the impressive block of the usual Podrascanin. The tie break arrives very soon, already on 25-13. The fifth set was all in Trentino's hands (6-3, 10-6), with the serve continuing to make the difference all the way (15-11).

Below is the scoreboard of the second semi-final of the "Volleyball under Monte Mucrone" quadrangular, played tonight at the Biella Forum in Biella.