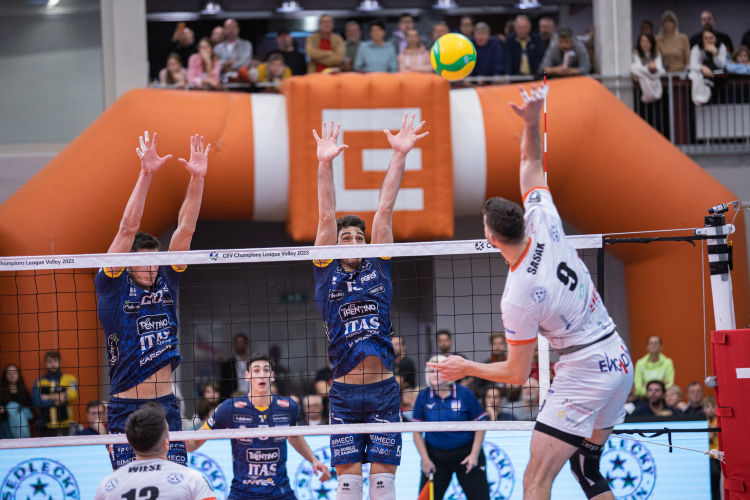 The first long international away game of the season does not make the yellow-blue team lose sheen from its current shining conditions. Indeed, this evening Trentino Itas followed up the four consecutive victories from which it was coming off, also winning against  ČEZ Karlovarsko, at the Indoor Sport Hall in Karlovy Vary, in four sets in the match valid for the second round of Pool D of 2023 CEV Champions League. A success that confirms Angelo Lorenzetti's lineup at the top of its group ranking on the eve of the SuperLega top match in Perugia (Sunday afternoon) and, looking further ahead, also to the one on November 29th, when Kedzierzyn-Kozle will arrive at the BLM Group Arena to establish the leadership in the European group at the end of the first round. As it happened in the recent past, today the Trentino lineup managed to put in play the right agonistic nastiness and to get to the bottom of some not-so-simple game situations, such as at the beginning of the first set (immediately down 4-8) or throughout the entire third period (spent chasing, without luck, the opponent). In both cases, the response carried out immediately after by the yellow-blue team was essential and impressive, which allowed them to fly to 2-0 first and then also to overwhelm the fourth partial, when the hosts had deluded themselves that they could still change the result. To always tip the balance toward the Trentino side was the exceptional evening of Daniele Lavia (mvp and best scorer with 21 points and 57% at the net in addition to four winning blocks) and the perseverance in the center of the net by Srecko Lisinac, who became more and more the protagonist as time went by (16 winning balls, with 77% in the first half, three aces and as many blocks), in a match in which Kaziyski and Michieletto struggled more than usual to score. Little bad, because Trentino Itas brought to the table other weapons, finding an excellent choral performance at the block (12 successful wins) and hitting (7 points with just nine hitting errors).

Below is the scoreboard of the match for Pool D second turn of the 2023 CEV Champions League, played tonight at the Sport Hall Indoor of Karlovy Vary.