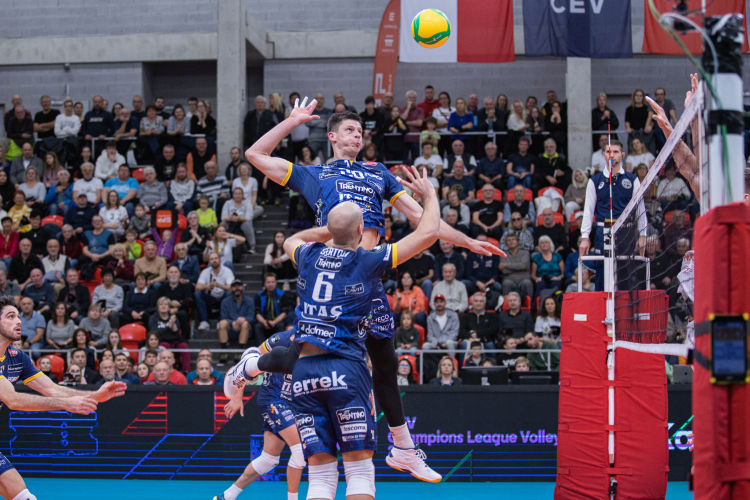 The match report. Trentino Itas shows up at the Indoor Sport Hall in Karlovy Vary (sold out) in a standard lineup: Sbertoli as a setter, Kaziyski as opposite, Michieletto and Lavia in position 4, Laurenzano as libero, Lisinac and Podrascanin (in his 100th participation in the yellow-blue team) as middle blockers. ČEZ Karlovarsko replied with Keemink as a setter, Sasak opposite, Inhat and Juhkami as outside-hitters, Zaijcek and Weir as middle-blockers, Pfeffer as libero. The yellow-blue's start is very tense (1-4), partly because Sasak immediately scores and immediately puts breakpoint balls on the ground. When Juhkami also scores diagonally a breakpoint (2-6), Lorenzetti is forced to interrupt the game; at the restart, fortunately, it is a different team, the one that gets back to the court. Lavia leads his team to the run-up and to the tie, which already arrives at 10 between winning attacks by the Calabrese and errors by the hosts. Mid set, Trento digs the difference with Lisinac and Kaziyski, who replies also at the block (16-12); the hosts with Sasak go back up to 17-16, before leaving space to the opponents, who with the usual Lavia at the net and Kaziyski from the nine-meter line accelerate (20-16), effectively securing the first set, closed on 25-19 also thanks to the excellent entrance of D'Heer (a winning block in his entrance for this very fundamental in place of Sbertoli).
The yellow-blue team takes the lead even at the start of the second partial and it takes advantage of Czechs’ errors and Kaziyski’s verve (6-3). The super wild Lavia makes a +4 (8-4), who pushes Novak, the hosts’ coach, to interrupt the game. Once resumed it, Lisinac makes two amazing aces for 11-4 and the road to 2-0 seems to be far away, but it is actually not; in fact, on 15-7 Trento’s second line drops the attention, allowing the white-red team’s comeback (15-10 and 16-12). Lorenzetti also calls a timeout, but he but had to wait a few more minutes before getting a pleasant reaction from his team. Again, it was Lavia to be essential (21-17 and 25-20), by consistently going from one position to another of the court.
In the third set, ČEZ Karlovarsko tries to do his best to keep the match going, fixing the initial disadvantages with a block (2-5). On 3-7 Lorenzetti inserts the former player Džavoronok at the place of Michieletto and Donovan’s gives back a positive response (6-9), but it is not enough to control the hosts’ pressure that, thanks to Inhat and Wiese, goes 5 points ahead (10-15), before Lisinac and Lavia reply blow for blow (16-19). At the end of the set, the Czech team takes the lead again thanks to Sasak and secure it with 21-25, making the competition go on to (at least) the fourth set.
Trentino Itas gets back on court with a strong determination at block and counterattack, with Michieletto back in the game. The game goes from 2-4 to 8-4 within minutes, and Lisinac stands out at the net, well-supported by Lavia. Trento beat the opponents several times (18-9 and 20-10) and easily close on 25-13, supported by the public’s applause.