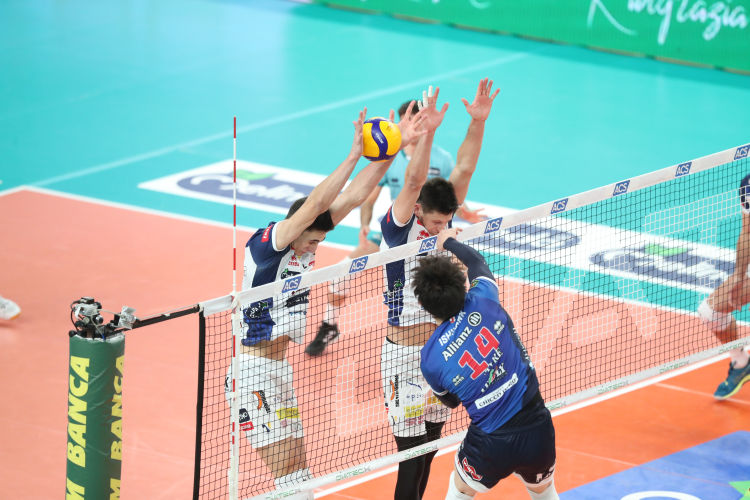 The ninth turn’s preview of the regular season SuperLega Credem Banca 2022/23 did not bring Itas Trentino either satisfactions, or the victory it was looking for to redeem last Sunday’s setback in Perugia. Tonight, at the BLM Group Arena it was Allianz Milano, who won 1-3, and this is the third overall victory ever (out of twenty competitions) against the yellow-blue Club.
Piazza’s team proved once again its efficiency in the away matches; as it already showed in Padua, Modena and Monza, with a high incisiveness at serve (8 direct aces), at block (9 scoring ones) and in counterattack, since the start of the match it came up against the yellow-blue team, who tried to turn things in the second set and re-opened the competition. On 1-1 the scale is in the hosts’ favor again, wild in the middle of the net with Ebadipour’s surprisingly skills (best hitter with his 17 points and match’s mvp) and incisive thanks to the attack squad of Patry and Ishiwaka. Trento replied with Lisinac (17 points with 83% in the first half, three blocks and one ace) and some sprints from Kaziyski and Lisinac but in the end, it was the lack of continuity during the sideout and reception phase that paid.

Below is the scoreboard of the valid match of the ninth matchday of the regular season of SuperLega Credem Banca 2022/23, played this evening at the BLM Group Arena.